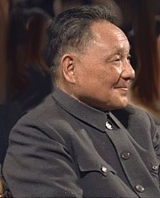 Born into a peasant background in Guang'an
Guang'an
Guang'an is a prefecture-level city in eastern Sichuan province. It is most famous as the birthplace of China's former paramount leader Deng Xiaoping. Guang'an lies between the hills of central Sichuan and the gorges area of the east...
, Sichuan
Sichuan
' , known formerly in the West by its postal map spellings of Szechwan or Szechuan is a province in Southwest China with its capital in Chengdu...
, China
Qing Dynasty
The Qing Dynasty was the last dynasty of China, ruling from 1644 to 1912 with a brief, abortive restoration in 1917. It was preceded by the Ming Dynasty and followed by the Republic of China....
, Deng studied and worked in France in the 1920s, where he was influenced by Marxism
Marxism
Marxism is an economic and sociopolitical worldview and method of socioeconomic inquiry that centers upon a materialist interpretation of history, a dialectical view of social change, and an analysis and critique of the development of capitalism. Marxism was pioneered in the early to mid 19th...
.

小朋友不聴話,該打打屁股了. Translation: It's time to smack the bottom of unruly little children. (

While talking to president Jimmy Carter during his brief visit to the United States, thereby informing the USA that China was ready to go to war with Vietnam.

“Well, that’s the way it’s presented in our propaganda. We needed that to express the fighting spirit of our forces. In fact, it was a very easy military operation.(On The Crossing of Luding Bridge, The Red Army Long March.)

former US National Security Advisor Zbigniew Brzezinski mentioned a conversation that he once had with Deng Xiaoping.