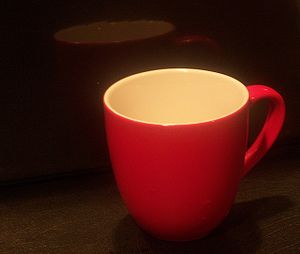 A demitasse is a small cup used to serve Arabic coffee
Arabic coffee
Arabic coffee is a general name that refers to the way coffee is prepared in many Arab Gulf countries.There are two main ways of preparing Arabic coffee. Traditional coffee brewing, more common in Najd and Hijaz, is flavor-rich with cardamom, and sometimes other spices like saffron , cloves, and...
or espresso
Espresso
Espresso is a concentrated beverage brewed by forcing a small amount of nearly boiling water under pressure through finely ground coffee. Espresso is widely known throughout the world....
. In some languages it is called fincan, fildžan, filxhan or φλιτζάνι (flidzáni). In Spanish, it is called a pocillo.

It typically has about 60–90 ml (2–3 fl oz
Fluid ounce
A fluid ounce is a unit of volume equal to about 28.4 mL in the imperial system or about 29.6 mL in the US system. The fluid ounce is distinct from the ounce, which measures mass...
) capacity — half the size of a full coffee cup (a tasse à café
Tasse à café
A tasse à café, French for coffee cup, is a cup, generally of white porcelain and of around 120 ml , in which coffee is served...
is about 120 ml (4 fl oz)). Typically they are made of white pottery
Pottery
Pottery is the material from which the potteryware is made, of which major types include earthenware, stoneware and porcelain. The place where such wares are made is also called a pottery . Pottery also refers to the art or craft of the potter or the manufacture of pottery...
or porcelain
Porcelain
Porcelain is a ceramic material made by heating raw materials, generally including clay in the form of kaolin, in a kiln to temperatures between and...
and accompanied by matching saucer
Saucer
A saucer is a small type of dishware, a plate that is specifically used with and for supporting a cup – a cylindrical cup intended for coffee or a half-sphere teacup for tea. Additionally, the saucer is a distant cousin to the plate. The saucer has a raised centre with a depression sized to fit a...
s, but some coffeehouse
Coffeehouse
A coffeehouse or coffee shop is an establishment which primarily serves prepared coffee or other hot beverages. It shares some of the characteristics of a bar, and some of the characteristics of a restaurant, but it is different from a cafeteria. As the name suggests, coffeehouses focus on...
s and china companies also produce brightly decorated varieties. Another type of demitasse has a glass
Glass
Glass is an amorphous solid material. Glasses are typically brittle and optically transparent.The most familiar type of glass, used for centuries in windows and drinking vessels, is soda-lime glass, composed of about 75% silica plus Na2O, CaO, and several minor additives...
cup set into a metal frame.

In May 2008 the international office of the Guinness Book of World Records confirmed the Ipswich
City of Ipswich
The City of Ipswich is a Local Government Area in South East Queensland, covering an area of along the coast about southwest of Brisbane, the capital of Queensland. The City of Ipswich has a population of 162,380 .-History:...
City Council's Mayor's collection of 650 sets of demitasse cups (1500 individual cups) is the biggest collection in the world. The Mayor of Ipswich Cr Paul Pisasale has been collecting demitasse for over 15 years.
The source of this article is wikipedia, the free encyclopedia.  The text of this article is licensed under the GFDL.