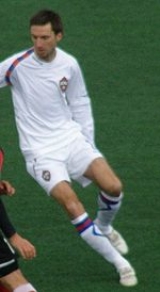 Encyclopedia
Deividas Šemberas is a Lithuania
Lithuania
Lithuania , officially the Republic of Lithuania is a country in Northern Europe, the biggest of the three Baltic states. It is situated along the southeastern shore of the Baltic Sea, whereby to the west lie Sweden and Denmark...
n professional footballer
Football (soccer)
Association football, more commonly known as football or soccer, is a sport played between two teams of eleven players with a spherical ball...
who plays as centre back for Russian Premier League
Russian Premier League
The Russian Premier League , currently called SOGAZ Russian Football Championship due to sponsorship reasons, is the top division of Russian football. There are 16 teams in the competition...
club PFC CSKA Moscow. He plays for his country's national team and has made over 70 caps.

Šemberas, who is a Lithuanian
Lithuania national football team
The national football team of Lithuania is under the auspices of the Lithuanian Football Federation. It played its first match in 1923. In 1940, Lithuania was occupied by the Soviet Union; the country regained its independence in 1990 and played their first match as a new nation against Georgia on...
international, has played for Dynamo Moscow
FC Dynamo Moscow
Dynamo Moscow is a Russian football club based in Moscow, currently playing in the Russian Premier League. Dynamo's traditional kit colours are blue and white...
and FK Žalgiris Vilnius
FK Žalgiris Vilnius
VMFD Žalgiris is a Lithuanian football club, playing in the capital, Vilnius. They have won the Lithuanian Championship three times: 1991, 1992, and 1999. The team's colours are green and white...
.