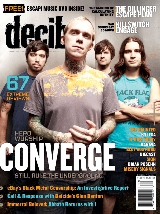 Encyclopedia
Decibel is a monthly heavy metal
Heavy metal music
Heavy metal is a genre of rock music that developed in the late 1960s and early 1970s, largely in the Midlands of the United Kingdom and the United States...
and extreme music magazine
Magazine
Magazines, periodicals, glossies or serials are publications, generally published on a regular schedule, containing a variety of articles. They are generally financed by advertising, by a purchase price, by pre-paid magazine subscriptions, or all three...
published by the Philadelphia-based Red Flag Media. Since October 2004, Decibel has featured a plethora of extreme metal bands and musicians. Its sections include Upfront, Features, Reviews, Guest Columns and the Decibel Hall of Fame. The magazine's tag-line is currently "Extremely Extreme" (previously "The New Noise").


"Decibel Magazine is founded upon a steadfast commitment to quality, cutting-edge coverage of every subgenre under the expanding umbrella of extreme music. Examining the topic from the same professional perspective that Spin
Spin (magazine)
Spin is a music magazine founded in 1985 by publisher Bob Guccione Jr.-History:In its early years, the magazine was noted for its broad music coverage with an emphasis on college-oriented rock music and on the ongoing emergence of hip-hop. The magazine was eclectic and bold, if sometimes haphazard...
and Rolling Stone
Rolling Stone
Rolling Stone is a US-based magazine devoted to music, liberal politics, and popular culture that is published every two weeks. Rolling Stone was founded in San Francisco in 1967 by Jann Wenner and music critic Ralph J...
provide for mainstream rock music, Decibel has assembled the finest professional extreme music journalists in the world. The glossy full-color monthly will rival any of its European counterparts, providing American metal, hardcore and extreme rock fans with insightful interviews, reviews, news, and a myriad of special features they won't find anywhere else."

Each issue of Decibel features an article dubbed the Hall of Fame which pays tribute to a significant album in the history of heavy metal music. The feature is usually very lengthy and in depth consisting of interviews, photographs and information. In order to be selected for the Hall of Fame, all contributing band members to the specific album must be alive at the time of interviewing.

In 2009, 25 of the Hall of Fame entries were used as the basis for the book Precious Metal: Decibel Presents the Stories Behind 25 Extreme Metal Masterpieces released through Da Capo Press
Da Capo Press
Da Capo Press, is an American publishing company with headquarters in Cambridge, Massachusetts. It was founded in 1964 as a publisher of music books, as a division of Plenum Publishers. it had additional offices in offices in New York City, Philadelphia and Emeryville, California...
. The book also includes previously unreleased interview questions that were left out of the magazine articles, and a full piece on Darkthrone
Darkthrone
Darkthrone is a Norwegian black metal band. They formed in 1987 as a death metal band, but after embracing the black metal style in 1991, they became a driving force in the Norwegian black metal scene. For most of this period Darkthrone has consisted of just two musicians, Nocturno Culto and...
's Transilvanian Hunger
Transilvanian Hunger
Transilvanian Hunger is the fourth studio album by Norwegian black metal band Darkthrone, released in 1994 through Peaceville Records. It was the band's first album to be recorded with just two members, Nocturno Culto and Fenriz, following the departure of Zephyrous...
that was never published in a magazine due to its length.

In November 2010, the magazine announced the launch of the monthly Decibel Flexi Series. Beginning with the January 2011 issue (#75), the magazine now includes a limited vinyl flexi disc
Flexi disc
The flexi disc is a phonograph record made of a thin, flexible vinyl sheet with a molded-in spiral stylus groove, and is designed to be playable on a normal phonograph turntable...
bound into the magazine each month available exclusively to its subscribers. The content of the discs is said to include "100 percent exclusive songs" recorded by artists that have been previously featured in the magazine.