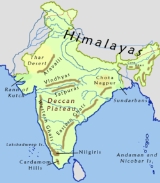 Overview
The Deccan Plateau is a large plateau
Plateau
In geology and earth science, a plateau , also called a high plain or tableland, is an area of highland, usually consisting of relatively flat terrain. A highly eroded plateau is called a dissected plateau...
in India
India
India , officially the Republic of India , is a country in South Asia. It is the seventh-largest country by geographical area, the second-most populous country with over 1.2 billion people, and the most populous democracy in the world...
, making up the majority of the southern part of the country. It rises a hundred meters high in the north, rising further to more than a kilometers high in the south, forming a raised triangle nested within the familiar downward-pointing triangle of the Indian subcontinent
Indian subcontinent
The Indian subcontinent, also Indian Subcontinent, Indo-Pak Subcontinent or South Asian Subcontinent is a region of the Asian continent on the Indian tectonic plate from the Hindu Kush or Hindu Koh, Himalayas and including the Kuen Lun and Karakoram ranges, forming a land mass which extends...
's coastline.

It extends over eight Indian states and encompasses a wide range of habitats, covering most of central and southern India
South India
South India is the area encompassing India's states of Andhra Pradesh, Karnataka, Kerala and Tamil Nadu as well as the union territories of Lakshadweep and Pondicherry, occupying 19.31% of India's area...
.

States covered in the region

Position or geographical extent of the physical feature

What is the impact of population on peninsular plateau

Which are the metalic & nonmetalic minerals found there?
More
x