Overview
Daraga is a 1st class municipality in the province of Albay, Philippines
Philippines
The Philippines , officially known as the Republic of the Philippines , is a country in Southeast Asia in the western Pacific Ocean. To its north across the Luzon Strait lies Taiwan. West across the South China Sea sits Vietnam...
.
According to the 2007 census, it has a population of 110,625 people in 20,082 households.


February 1, 1814 was Mayon's deadliest eruption.
The Municipality of Daraga is located in the Southwest portion of Albay Province or at geographical coordinates of between 123 124 degrees longitude and between 13 14 degrees latitude.

What is it's history?
More

Encyclopedia
Daraga is a 1st class municipality in the province of Albay, Philippines
Philippines
The Philippines , officially known as the Republic of the Philippines , is a country in Southeast Asia in the western Pacific Ocean. To its north across the Luzon Strait lies Taiwan. West across the South China Sea sits Vietnam...
.
According to the 2007 census, it has a population of 110,625 people in 20,082 households. 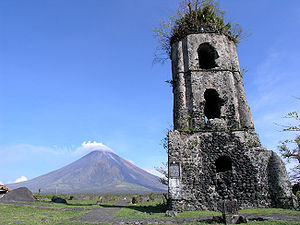 The Municipality of Daraga is located in the Southwest portion of Albay Province or at geographical coordinates of between 123 124 degrees longitude and between 13 14 degrees latitude. It is bounded on the North by Legazpi City; on the south by the Province of Sorsogon particularly the municipality of Pilar; on the East by Legazpi City and on the West by the Municipalities of Camalig and Jovellar.

In terms of employment and livelihood, farming ranks high at 33.53%, crafts and related workers as well as elementary occupations follows second with 17.71% and 21.89% respectively.

The legendary account gives meaning to the name DARAGA which refers to the more popular meaning of a Maiden. It is the local term for unmarried woman not only in the municipality of DARAGA but also in the entire Bicol Region. The early beginnings of Daraga dates back to 12th century where the settlement underwent several changes in location due to the constant threats posed by Mayon Volcano, adopting names from Budiao to Cagsawa and finally Daraga.

Daraga emerged to be progressive and prosperous in economy eventually becoming a first class municipality. The town economy, originally agriculture-based., has rapidly transformed into an eclectic emerging urban system enjoying the economic opportunities of being contiguously located to the urban center of Legazpi City. It draws trade relations with the island province of Masbate through the nearby Port of Pilar. It is strategically located along the Maharlika Highway being centrally accessible from Manila and the Visayas, as well as the other municipalities of Eastern Bicol Peninsula.

The municipality of DARAGA has a general climate characterized by Dry Season with a very pronounced Maximum Rainfall from November to December. Prevailing wind is in the general direction from North East to South West.

The Municipality of Daraga has predominantly Very Low Elevation (0–100 m) occupying about 80.63 square kilometers or 67.27% of the total municipal land area. The surface terrain is generally characterized by combination of levl to nearly level areas, Gentle to Undulating Areas and Undulating to Rolling Areas.

Minerals available within the municipality of Daraga are non-metallic consisting of Gravel, and Boulders. These minerals are abundant in Barangays Budiao, Busay, Bañadero and Matnog brought down from the slopes of Mayon Volcano during occurrences of volcanic eruptions and rains.

The surface drainage pattern of the Municipality of Daraga is largely affected by the water run-off coming from Mayon Volcano coupled with those from other directions. Major river systems which conveys and acts as natural drainage channel as well as water source includes the 1) Yawa River in Barangay
Barangay
A barangay is the smallest administrative division in the Philippines and is the native Filipino term for a village, district or ward...
Cullat, Malobago, Kilicao, Tagas, Binitayan & Bañag which connects to the Albay Gulf in Legazpi City; 2) Colabos Creek in Bañag, San Roque, Market Area, Sagpon, and Bagumbayan; 3) Quillarena River in Malabog & Budiao; 4) Gumacon Creek in Barangay Maroroy, Tagas; and 5) Gulang-Gulang Creek in Barangay Pandan.

The Municipality of Daraga has a total Road Network of about 129.01 kilometers. This is categorized either as National Roads, Provincial Roads, Municipal Roads and Barangay Roads. These barangay Roads comprised the bulk of the municipality road network system. About 24.97% are concrete paved while the remaining 75.03% remains in Asphalt, Gravel of Earth fill pavement conditions. These are about 25 bridges within the municipality and 66.22% of which are within barangay roads while the other bridges are part of national, provincial of barangay roads.

The Philippine National Railways passes through the Municipality of Daraga regularly on its way to Legazpi City or to Manila. It has a station in Barangay Market Area where the arrival and departure schedule is 5:14 AM and 3:30 PM respectively. However station facilities needs further improvement

Up to the present, Daraga has retained its title of being the most progressive town not only in the province of Albay but in the whole of the Bicol Region. For decades it has enjoyed the air of progress, being a long time first class municipality in the province.
- Daraga will be the future site of the Bicol I][mkmkm nternational Airport
Legazpi City International Airport
Bicol International Airport is an under construction international airport that would serve Legazpi City, the capital of Albay and the regional center of Bicol Region, in the Philippines. The airport is currently under construction in the town of Daraga...
which will further boost tourism in the region and will introduce more opportunities especially in this town. Local officials are now eyeing it's cityhood in the near future or upon the completion of the said international airport, if that so, Daraga would be the fourth city in Albay.

There are 927 existing commercial establishment spread around the municipality with 32 Banking and Financing agencies, 84 wholesaler and trading firms, 518 retailers, 252 service shops and offices and 40 real estate firms.
|

Cagsawa Ruins and Resort is located in Barangay Busay. Its prominent attraction is the Belfry of the Cagsawa Church which submerged in mudflow during the February 2, 1814 Mayon Volcano Eruption and killed 1,200 people. The site is presently developed and complete with facilities for rooms, lodging and food, toilets/bathrooms, stalls for native products /ornamentals, restaurant/eateries, telephones and administration office significant number of foreign and local tourist visit the site all year round and realizes a sizeable profit.

The Our Lady of the Gate Parish was constructed in 1773 atop Sta. Maria Hill in Brgy. San Roque and is uniquely known for its rich baroque architecture.

The annual celebration of Santacrusan in almost all barangays richly depicts the bicolano culture and tradition.

Daraga is politically subdivided into 54 barangay
Barangay
A barangay is the smallest administrative division in the Philippines and is the native Filipino term for a village, district or ward...
s.