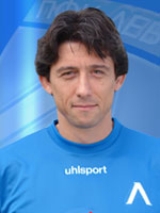 Encyclopedia
Daniel Boytchev Borimirov is a retired Bulgaria
Bulgaria
Bulgaria , officially the Republic of Bulgaria , is a parliamentary democracy within a unitary constitutional republic in Southeast Europe. The country borders Romania to the north, Serbia and Macedonia to the west, Greece and Turkey to the south, as well as the Black Sea to the east...
n footballer who played mainly as an attacking midfielder.

His career was almost exclusively associated with two clubs, Levski Sofia
PFC Levski Sofia
"Levski Sofia" redirects here. For the sports club, see Levski Sofia .PFC Levski Sofia, otherwise simply known as Levski or Levski Sofia, is a professional football club based in Sofia, Bulgaria...
and 1860 Munich
TSV 1860 München
Turn- und Sportverein München von 1860, commonly known as TSV 1860 München or 1860 Munich, is a German sports club based in Munich, Bavaria. The club's football team plays in the Second Bundesliga, after relegation from the Bundesliga following the 2003–04 season...
, later working in directorial capacities with the former. He was also capped nearly 70 times for the Bulgarian national team
Bulgaria national football team
The FIFA Bulgaria national football team is an association football team fielded by the Bulgarian Football Union, a member association of UEFA. The team's home ground is Vasil Levski in Sofia and Luboslav Penev is in charge manager after replacement of Lothar Matthäus...
, for which he appeared in four major international competitions.

Born in Vidin
Vidin
Vidin is a port town on the southern bank of the Danube in northwestern Bulgaria. It is close to the borders with Serbia and Romania, and is also the administrative centre of Vidin Province, as well as of the Metropolitan of Vidin...
, Borimirov started his professional career with PFC Levski Sofia
PFC Levski Sofia
"Levski Sofia" redirects here. For the sports club, see Levski Sofia .PFC Levski Sofia, otherwise simply known as Levski or Levski Sofia, is a professional football club based in Sofia, Bulgaria...
, having arrived at the club in 1990 from lowly FC Bdin
FC Bdin
FC Bdin is a Bulgarian football club based in Vidin, currently playing in the West B PFG, the second division of Bulgarian football. Its home stadium "Georgi Benkovski" has a capacity of 15 000 seats. Club colors are red and white. The club was officially founded in 1923.- History :The club was...
. In the beginning, he appeared mainly as a supporting striker, but eventually reconverted to attacking midfielder.

At Levski, Borimirov was very important – if not crucial – part in all of the club's six major titles during his first spell, three leagues
Bulgarian A Professional Football Group
The Bulgarian A Professional Football Group commonly known as A PFG is the top division of the Bulgarian football league system. The league is sponsored by Victoria FATA Insurance and therefore is officially known as Victoria A Football Group since 2011...
and three cups
Bulgarian Cup
The Bulgarian Cup is a Bulgarian annual football competition. It is the country's main cup competition and all officially registered Bulgarian football teams take part in it. It is sponsored by the Bulgarian Corporate Commercial Bank....
. After 32 goals combined in his last two years, with back-to-back national championships, he signed with Germany
Germany
Germany , officially the Federal Republic of Germany , is a federal parliamentary republic in Europe. The country consists of 16 states while the capital and largest city is Berlin. Germany covers an area of 357,021 km2 and has a largely temperate seasonal climate...
's TSV 1860 München
TSV 1860 München
Turn- und Sportverein München von 1860, commonly known as TSV 1860 München or 1860 Munich, is a German sports club based in Munich, Bavaria. The club's football team plays in the Second Bundesliga, after relegation from the Bundesliga following the 2003–04 season...
.

In the following years, although used more sparingly, Borimirov continued to be an important member for Munich 1860, eventually appearing in nearly 300 official matches in his eight and a half-year spell. In early January 2004, one week shy of his 34th birthday, he returned to Levski, being the driving force behind the success of the club in the 2005–06 UEFA Cup, helping the capital
Sofia
Sofia is the capital and largest city of Bulgaria and the 12th largest city in the European Union with a population of 1.27 million people. It is located in western Bulgaria, at the foot of Mount Vitosha and approximately at the centre of the Balkan Peninsula.Prehistoric settlements were excavated...
outfit to the quarterfinals, namely scoring against Udinese Calcio
Udinese Calcio
Udinese Calcio is an Italian football club based in Udine, Friuli-Venezia Giulia, and currently plays in the Serie A. Founded in 1896, Udinese is the second oldest club in the Serie A, after Genoa....
and FC Schalke 04
FC Schalke 04
Fußball-Club Gelsenkirchen-Schalke 04, commonly known as simply FC Schalke 04 or Schalke , is a German, association-football club originally from the Schalke district of Gelsenkirchen, North Rhine-Westphalia. Schalke has long been one of the most popular football teams in Germany, even though major...
(the latter in the stage where the club was ousted, 2–4 on aggregate).

In an interview on 16 August 2006, Borimirov stated he was attending coaching classes, intending to work in football after retiring as a player. On 1 July of the following year, he played for a FIFA
FIFA
The Fédération Internationale de Football Association , commonly known by the acronym FIFA , is the international governing body of :association football, futsal and beach football. Its headquarters are located in Zurich, Switzerland, and its president is Sepp Blatter, who is in his fourth...
All-Star team against China
China national football team
The China PR national football team is the national association football team of the People's Republic of China and is governed by the Chinese Football Association...
in an exhibition game as part of Hong Kong
Hong Kong
Hong Kong is one of two Special Administrative Regions of the People's Republic of China , the other being Macau. A city-state situated on China's south coast and enclosed by the Pearl River Delta and South China Sea, it is renowned for its expansive skyline and deep natural harbour...
's ten-year independence anniversary celebrations. The miscellaneous side was coached by Gérard Houllier
Gérard Houllier
Gérard Houllier, OBE , is a French football manager, who was last manager of Premier League club Aston Villa. He stepped down on 1 June 2011, following hospitalisation over heart problems towards the end of the 2010-2011 season....
, and featured players like Hidetoshi Nakata
Hidetoshi Nakata
, is a retired Japanese football player. He was one of the most famous Asian footballers of his generation.Nakata began his professional career in 1995 and won the Asian Football Confederation Player of the Year award in 1997 and 1998, the Scudetto with A.S...
, Stéphane Chapuisat, Christian Karembeu
Christian Karembeu
Christian Karembeu is a retired French international footballer and current scout for Arsenal Football Club...
, George Weah
George Weah
George Tawlon Manneh Oppong Ousman Weah is a Liberian humanitarian and politician, and an ex-footballer. He ran unsuccessfully for president in the 2005 election, losing to Ellen Johnson Sirleaf in the second round of voting...
and Brian McBride
Brian McBride
Brian Robert McBride is a retired American soccer player who finished his career for Chicago Fire in Major League Soccer , but spent the majority of his time in MLS playing for the Columbus Crew. For much of his career he played in Europe, notably for Fulham in the English Premier League...
.

Borimirov still played an important part in the 2006–07 season, playing in 20 matches (four goals) as Levski won the league – and the cup. He ended his career at the age of 38, playing his last game on 17 May 2008 against city neighbours PFC Slavia Sofia
PFC Slavia Sofia
PFC Slavia Sofia is a Bulgarian football club founded on 10 April 1913 in Sofia. Slavia's ground is Slavia Stadium with a capacity of 15,992. The team's colours are white and black....
, with his team winning the match.

After retiring, Borimirov served as director of football
Director of football
"Director of football" is a term describing a senior management figure at a football club, most commonly used in Europe. The exact nature of the role is often unclear and extremely variable and causes much debate in the sports media...
at Levski Sofia, replacing former club and national teammate Nasko Sirakov
Nasko Sirakov
Nasko Petkov Sirakov is a retired Bulgarian footballer who played mainly as a striker.Part of the Bulgarian team at the 1994 FIFA World Cup as it finished fourth, he was one of the most important footballers in the country in the 80's/90's, being a legend at Levski Sofia, a club he represented in...
, and himself being replaced at the end of 2008–09 by Georgi Ivanov
Georgi Ivanov (footballer)
Georgi Ivanov, nicknamed Gonzo , born 2 July 1976 in Plovdiv), is a former Bulgarian football striker who is the current manager of FC Levski Sofia...
.

In 2006, still as a player, Borimirov gained notoriety in Bulgarian football circles for his violent outbursts after controversial referee decisions. One particular accident in which he was involved in resulted in him spitting in the face of the referee. Borimirov was fined 10,000 Bulgarian lev
Bulgarian lev
The lev is the currency of Bulgaria. It is divided in 100 stotinki . In archaic Bulgarian the word "lev" meant "lion".It is speculated that Bulgaria, as a member of the European Union will adopt the Euro in 2015 .- First lev, 1881–1952 :...
by the Bulgarian Football Union
Bulgarian Football Union
The Bulgarian Football Union is a football association based in Bulgaria and a member of UEFA. It organizes a football league, Bulgarian A Professional Football Group, and fields its Bulgaria national football team in UEFA and FIFA -authorised competitions.A legal entity that it claims descent...
, later apologizing for his behaviour.

In the first competition, as the national team finished in fourth place, Borimirov scored against Greece
Greece national football team
The Greece national football team represents Greece in association football and is controlled by the Hellenic Football Federation, the governing body for football in Greece. Greece's home ground is Karaiskakis Stadium in Piraeus and their head coach is Fernando Santos...
in the group stage, for Bulgaria's first ever FIFA World Cup
FIFA World Cup
The FIFA World Cup, often simply the World Cup, is an international association football competition contested by the senior men's national teams of the members of Fédération Internationale de Football Association , the sport's global governing body...
win (4–0, in Chicago
Chicago
Chicago is the largest city in the US state of Illinois. With nearly 2.7 million residents, it is the most populous city in the Midwestern United States and the third most populous in the US, after New York City and Los Angeles...
, having played only eight minutes). He also converted his penalty shootout attempt in the round of 16 win against Mexico
Mexico national football team
The Mexican national football team represents Mexico in association football and is governed by the Mexican Football Federation , the governing body for football in Mexico. Mexico's home stadium is the Estadio Azteca and their head coach is José Manuel de la Torre...
.