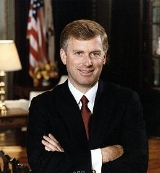 Quayle was born in Indianapolis but spent most of his childhood living in Arizona. He married Marilyn Tucker in 1972 and obtained his J.D.
Juris Doctor
Juris Doctor is a professional doctorate and first professional graduate degree in law.The degree was first awarded by Harvard University in the United States in the late 19th century and was created as a modern version of the old European doctor of law degree Juris Doctor (see etymology and...
from Indiana University McKinney School of Law in 1974.

Bobby Knight told me this: "There is nothing that a good defense—cannot beat a better offense." In other words a good offense wins.

In George Bush you get experience, and with me you get the future.

People that are really very weird can get into sensitive positions and have a tremendous impact on history.

We are ready for any unforseen event that may or may not occur.

When you take the UNCF model that, what a waste it is to lose one's mind, or not to have a mind is being very wasteful, how true that is.

Speech to the United Negro College Fund (9 May 1989), mangling the Fund's slogan "A mind is a terrible thing to waste."

The other day [the President] said, I know you've had some rough times, and I want to do something that will show the nation what faith that I have in you, in your maturity and sense of responsibility. Would you like a puppy?