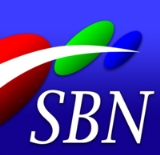 Encyclopedia
SBN 21 is a television station
Television station
A television station is a business, organisation or other such as an amateur television operator that transmits content over terrestrial television. A television transmission can be by analog television signals or, more recently, by digital television. Broadcast television systems standards are...
of Southern Broadcasting Network
Southern Broadcasting Network
SBN is a Philippine television network owned by Filipino-Chinese tycoon Lucio Co, the owner of Puregold Price Club Inc., a supermarket chain. Its main broadcast facilities at 5/F Summit One Bldg, Shaw Boulevard, Mandaluyong City...
, with main broadcast facilities at Mandaluyong City
Mandaluyong City
The City of Mandaluyong is one of the cities and municipalities that comprise Metro Manila in the Philippines. It is bordered on the west by the country's capital, Manila, to the north by San Juan City, to the east by Quezon City and Pasig City, and by Makati City to the south...
. became the first local UHF TV station in Metro Manila in May, 1992 also known as World TV 21.

Southern Broadcasting Network of Davao launched SBN Channel 21, the first local UHF TV station in Metro Manila after the opening of another UHF station, DYET-TV
DYET-TV
DYET-TV, channel 21, is a television station of Philippine television network Associated Broadcasting Company. Its studios and transmitter are located at Capitol Road, Camp Marina, Barangay Kalunasan, Cebu City...
. It was then known as World TV 21. The idea is to bring back programming similar to the forcibly shut-down FEN Channel 17
Far East Network
The Far East Network was a network of American military radio and television stations, primarily serving U.S Forces in Japan, Okinawa, the Philippines, and U.S...
of the former Clark US Air Base a year earlier due to the eruption of Mt. Pinatubo.