Encyclopedia
The DKW F102 is a car that was produced initially by German manufacturer Auto Union AG
Auto Union
Auto Union was an amalgamation of four German automobile manufacturers, founded in 1932 and established in 1936 in Chemnitz, Saxony, during the Great Depression. The company has evolved into present day Audi, as a subsidiary of Volkswagen Group....
and later by Volkswagen AG
Volkswagen
Volkswagen is a German automobile manufacturer and is the original and biggest-selling marque of the Volkswagen Group, which now also owns the Audi, Bentley, Bugatti, Lamborghini, SEAT, and Škoda marques and the truck manufacturer Scania.Volkswagen means "people's car" in German, where it is...
after Volkswagen acquired the Auto Union brands from Daimler-Benz AG in 1964. 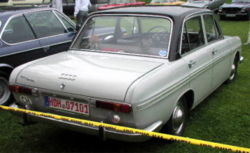 It succeeded the Auto Union 1000
Auto Union 1000
The Auto Union 1000 was a compact front wheel drive saloon manufactured by Auto Union AG between 1958 and 1963. It was the first model branded as an Auto Union by the manufacturer since the 1930s: it replaced the paradoxically named DKW 3=6, although the latter continued in production,...
and 1000S models in 1963. It was the last model developed before the Volkswagen take-over, and under their auspices it provided the base for the later Audi F103
Audi F103
F103 is the internal designation for a series of car models produced by Auto Union in West Germany from 1965 to 1972, derived from the earlier DKW F102...
models (the "Audi" and later "Audi 72", plus 60, 75, 80, and Super 90).

The F102 featured state-of-the-art two-stroke technology for its time and a unibody of modern design. Nevertheless, the market of the 1960s shunned two-stroke engines as old-fashioned. The F102 in consequence sold below the company's expectations and was the source of huge financial losses. Due to this situation Volkswagen was forced to do a radical cut in 1966. The production of two-stroke-engines was ceased, and the F102 was redesigned to fit a four-cylinder-four-stroke-engine. At this point the name of DKW was abandoned, and the F103 became the first car with an Audi
Audi
Audi AG is a German automobile manufacturer, from supermini to crossover SUVs in various body styles and price ranges that are marketed under the Audi brand , positioned as the premium brand within the Volkswagen Group....
label since World War II
World War II
World War II, or the Second World War , was a global conflict lasting from 1939 to 1945, involving most of the world's nations—including all of the great powers—eventually forming two opposing military alliances: the Allies and the Axis...
.