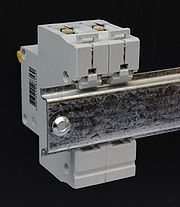 A DIN
Din
DIN or Din or din can have several meanings:* A din is a loud noise.* Dīn, an Arabic term meaning "religion" or "way of life".* Din is one of the ten aspects of the Ein Sof in Kabbalah ....
rail is a metal rail of a standard type widely used for mounting circuit breaker
Circuit breaker
A circuit breaker is an automatically operated electrical switch designed to protect an electrical circuit from damage caused by overload or short circuit. Its basic function is to detect a fault condition and, by interrupting continuity, to immediately discontinue electrical flow...
s and industrial control equipment inside equipment racks. The term applies to multiple similar standards.

This type of rail was originally standardized by the Deutsches Institut für Normung
Deutsches Institut für Normung
is the German national organization for standardization and is that country's ISO member body. DIN is a Registered German Association headquartered in Berlin...
(DIN), the German national standards organization. The most popular is 35 mm wide.

The rails are symmetrical within the tolerances given. There are four popular C section rail, C20, C30, C40 and C50. The number suffix corresponds to the overall vertical length of the rail.