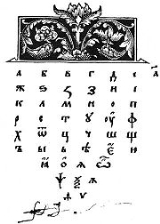 Overview
The Cyrillic script or azbuka is an alphabetic writing system
Writing system
A writing system is a symbolic system used to represent elements or statements expressible in language.-General properties:Writing systems are distinguished from other possible symbolic communication systems in that the reader must usually understand something of the associated spoken language to...
developed in the First Bulgarian Empire
First Bulgarian Empire
The First Bulgarian Empire was a medieval Bulgarian state founded in the north-eastern Balkans in c. 680 by the Bulgars, uniting with seven South Slavic tribes...
during the 10th century AD at the Preslav Literary School
Preslav Literary School
The Preslav Literary School was the first literary school in the medieval Bulgarian Empire. It was established by Boris I in 885 or 886 in Bulgaria's capital, Pliska...
. It is the basis of alphabet
Alphabet
An alphabet is a standard set of letters—basic written symbols or graphemes—each of which represents a phoneme in a spoken language, either as it exists now or as it was in the past. There are other systems, such as logographies, in which each character represents a word, morpheme, or semantic...
s used in various languages, past and present, of Eastern Europe and Asia, especially those of Slavic
Slavic languages
The Slavic languages , a group of closely related languages of the Slavic peoples and a subgroup of Indo-European languages, have speakers in most of Eastern Europe, in much of the Balkans, in parts of Central Europe, and in the northern part of Asia.-Branches:Scholars traditionally divide Slavic...
origin, and also non-Slavic languages influenced by Russian.

Cyrillic is derived from the Ancient Greek uncial script
Greek alphabet
The Greek alphabet is the script that has been used to write the Greek language since at least 730 BC . The alphabet in its classical and modern form consists of 24 letters ordered in sequence from alpha to omega...
, augmented by ligatures and consonants from the older Glagolitic alphabet
Glagolitic alphabet
The Glagolitic alphabet , also known as Glagolitsa, is the oldest known Slavic alphabet. The name was not coined until many centuries after its creation, and comes from the Old Slavic glagolъ "utterance" . The verb glagoliti means "to speak"...
for sounds not found in Ancient Greek.

What country has the biggest population that uses cyrllic alphabet

How has the russian alphabet changed overtime? (in simple terms as i am still young)
More
x