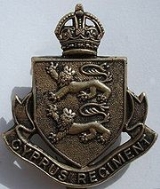 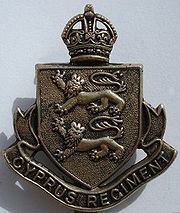 The Cyprus Regiment was created by the British Government during the Second World War and made part of the British Army
British Army
The British Army is the land warfare branch of Her Majesty's Armed Forces in the United Kingdom. It came into being with the unification of the Kingdom of England and Scotland into the Kingdom of Great Britain in 1707. The new British Army incorporated Regiments that had already existed in England...
structure. It was mostly volunteers from the Greek and Turkish Cypriot inhabitants of Cyprus
Cyprus
Cyprus , officially the Republic of Cyprus , is a Eurasian island country, member of the European Union, in the Eastern Mediterranean, east of Greece, south of Turkey, west of Syria and north of Egypt. It is the third largest island in the Mediterranean Sea.The earliest known human activity on the...
but also included other Commonwealth nationalities.

The Cyprus Regiment was founded on the 12th of April 1940 and disbanded on the 31st of March 1950. It included infantry, Mechanical, Transport, and Pack Transport Coys. Cypriot mule drivers were the first colonial troops sent to the western front. They served in France, Ethiopia and Italy carrying equipment to areas inaccessible to vehicles.

The badge of the Cyprus Regiment was a shield charged with two lions passant guardant in pale and ensigned with the Imperial Crown and below the shield was a scroll bearing the title of the regiment.

On a brief visit to Cyprus in 1943, Winston Churchill
Winston Churchill
Sir Winston Leonard Spencer-Churchill, was a predominantly Conservative British politician and statesman known for his leadership of the United Kingdom during the Second World War. He is widely regarded as one of the greatest wartime leaders of the century and served as Prime Minister twice...
praised the "soldiers of the Cyprus Regiment who have served honourably on many fields from Libya to Dunkirk."

About 30,000 Cypriots served in the Cyprus Regiment. The regiment was involved in action from the very start and served at Dunkirk, in the Greek Campaign (Battle of Greece
Battle of Greece
The Battle of Greece is the common name for the invasion and conquest of Greece by Nazi Germany in April 1941. Greece was supported by British Commonwealth forces, while the Germans' Axis allies Italy and Bulgaria played secondary roles...
) (about 600 soldiers were captured in Kalamata
Kalamata
Kalamata is the second-largest city of the Peloponnese in southern Greece. The capital and chief port of the Messenia prefecture, it lies along the Nedon River at the head of the Messenian Gulf...
in 1941), North Africa (Operation Compass
Operation Compass
Operation Compass was the first major Allied military operation of the Western Desert Campaign during World War II. British and Commonwealth forces attacked Italian forces in western Egypt and eastern Libya in December 1940 to February 1941. The attack was a complete success...
), France, the Middle East and Italy. Many soldiers were taken prisoner especially at the beginning of the war and were interned in various POW camps (Stalag
Stalag
In Germany, stalag was a term used for prisoner-of-war camps. Stalag is a contraction of "Stammlager", itself short for Kriegsgefangenen-Mannschafts-Stammlager.- Legal definitions :...
) including Lamsdorf (Stalag VIII-B
Stalag VIII-B
Stalag VIII-B Lamsdorf was a notorious German Army prisoner of war camp, later renumbered Stalag-344, located near the small town of Lamsdorf in Silesia. The camp initially occupied barracks built to house British and French prisoners in World War I...
), Stalag IVC at Wistritz bei Teplitz and Stalag 4b near Most in the Czech Republic. The soldiers captured in Kalamata were transported by train to prisoner of war camps.

In the post war years and prior to its disbandment, the regiment served in Cyprus and the Middle East including Palestine during the 1945-1948 period.

Individual soldiers who served in the Cyprus Regiment: