I am in Italy at this time and have cashed my bonds at the Posta Italiana. They have issued a bank note called Vaglia in Euros in my name. Is this ...
More

The main qualities of an orthodox currency board are:

Consequences of adopting a fixed exchange rate as prime target

The currency board in question will no longer issue fiat money
Fiat money
Fiat money is money that has value only because of government regulation or law. The term derives from the Latin fiat, meaning "let it be done", as such money is established by government decree. Where fiat money is used as currency, the term fiat currency is used.Fiat money originated in 11th...
but instead will only issue one unit of local currency for each unit (or decided amount) of foreign currency it has in its vault (often a hard currency
Hard currency
Hard currency , in economics, refers to a globally traded currency that is expected to serve as a reliable and stable store of value...
such as the U.S. dollar
United States dollar
The United States dollar , also referred to as the American dollar, is the official currency of the United States of America. It is divided into 100 smaller units called cents or pennies....
or the euro
Euro
The euro is the official currency of the eurozone: 17 of the 27 member states of the European Union. It is also the currency used by the Institutions of the European Union. The eurozone consists of Austria, Belgium, Cyprus, Estonia, Finland, France, Germany, Greece, Ireland, Italy, Luxembourg,...
). The surplus on the balance of payments
Balance of payments
Balance of payments accounts are an accounting record of all monetary transactions between a country and the rest of the world.These transactions include payments for the country's exports and imports of goods, services, financial capital, and financial transfers...
of that country is reflected by higher deposits local banks hold at the central bank as well as (initially) higher deposits of the (net) exporting firms at their local banks. The growth of the domestic money supply can now be coupled to the additional deposits of the banks at the central bank that equals additional hard foreign exchange reserves
Foreign exchange reserves
Foreign-exchange reserves in a strict sense are 'only' the foreign currency deposits and bonds held by central banks and monetary authorities. However, the term in popular usage commonly includes foreign exchange and gold, Special Drawing Rights and International Monetary Fund reserve positions...
in the hands of the central bank.

The virtue of this system is that questions of currency stability no longer apply. The drawbacks are that the country no longer has the ability to set monetary policy according to other domestic considerations, and that the fixed exchange rate will, to a large extent, also fix a country's terms of trade, irrespective of economic differences between it and its trading partners.
Typically, currency boards have advantages for small, open economies which would find independent monetary policy difficult to sustain. They can also form a credible commitment to low inflation. 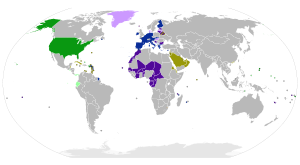 Hong Kong
Hong Kong
Hong Kong is one of two Special Administrative Regions of the People's Republic of China , the other being Macau. A city-state situated on China's south coast and enclosed by the Pearl River Delta and South China Sea, it is renowned for its expansive skyline and deep natural harbour...
operates a currency board (Hong Kong Monetary Authority
Hong Kong Monetary Authority
The Hong Kong Monetary Authority or HKMA is Hong Kong's central banking institution . It is a government authority founded on 1 April 1993 via the consolidation of "Office of the Exchange Fund" and the "Office of the Commissioner of Banking"...
), as do Bulgaria
Bulgaria
Bulgaria , officially the Republic of Bulgaria , is a parliamentary democracy within a unitary constitutional republic in Southeast Europe. The country borders Romania to the north, Serbia and Macedonia to the west, Greece and Turkey to the south, as well as the Black Sea to the east...
and Lithuania
Lithuania
Lithuania , officially the Republic of Lithuania is a country in Northern Europe, the biggest of the three Baltic states. It is situated along the southeastern shore of the Baltic Sea, whereby to the west lie Sweden and Denmark...
. Estonia
Estonia
Estonia , officially the Republic of Estonia , is a state in the Baltic region of Northern Europe. It is bordered to the north by the Gulf of Finland, to the west by the Baltic Sea, to the south by Latvia , and to the east by Lake Peipsi and the Russian Federation . Across the Baltic Sea lies...
established a currency board pegged to the Deutsche Mark in 1992 after gaining independence, and this policy is seen as a mainstay of that country's subsequent economic success (see Economy of Estonia
Economy of Estonia
Estonia is a member of the European Union and the eurozone and is an advanced economy, according to the IMF.Before the Second World War Estonia's economy was based on agriculture, but there was a significant knowledge sector and a growing industrial sector, similar to Finland...
for a detailed description of the Estonian currency board). Argentina
Argentina
Argentina , officially the Argentine Republic , is the second largest country in South America by land area, after Brazil. It is constituted as a federation of 23 provinces and an autonomous city, Buenos Aires...
abandoned its currency board in January 2002 after a severe recession. To some, this emphasised the fact that currency boards are not irrevocable, and hence may be abandoned in the face of speculation by foreign exchange traders. However, Argentina's system was not an orthodox currency board, as it did not strictly follow currency board rules - a fact which many see as the true cause of its collapse. Others argue that Argentina's monetary system was an inconsistent mixture of currency board and central banking elements. They think misunderstanding of the workings of the system by economists and
policymakers contributed to the Argentine government's decision to devalue the peso in January 2002. The economy fell deeper into depression before a recovery began later in the year.

The British Overseas Territories
British overseas territories
The British Overseas Territories are fourteen territories of the United Kingdom which, although they do not form part of the United Kingdom itself, fall under its jurisdiction. They are remnants of the British Empire that have not acquired independence or have voted to remain British territories...
of Gibraltar
Gibraltar
Gibraltar is a British overseas territory located on the southern end of the Iberian Peninsula at the entrance of the Mediterranean. A peninsula with an area of , it has a northern border with Andalusia, Spain. The Rock of Gibraltar is the major landmark of the region...
, the Falkland Islands
Falkland Islands
The Falkland Islands are an archipelago in the South Atlantic Ocean, located about from the coast of mainland South America. The archipelago consists of East Falkland, West Falkland and 776 lesser islands. The capital, Stanley, is on East Falkland...
and St. Helena continue to operate currency boards, backing their locally printed currency notes with pound sterling
Pound sterling
The pound sterling , commonly called the pound, is the official currency of the United Kingdom, its Crown Dependencies and the British Overseas Territories of South Georgia and the South Sandwich Islands, British Antarctic Territory and Tristan da Cunha. It is subdivided into 100 pence...
reserves.

A gold standard is a special case of a currency board where the value of the national currency is linked to the value of gold instead of a foreign currency.


Examples against the Euro


Examples against the U.S. dollar


Examples against the pound sterling


Examples against other currencies


For a precise definition of what constitutes a currency board, including past examples, see: