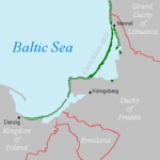 Encyclopedia
The Curonian language or Old Curonian is an extinct language
Extinct language
An extinct language is a language that no longer has any speakers., or that is no longer in current use. Extinct languages are sometimes contrasted with dead languages, which are still known and used in special contexts in written form, but not as ordinary spoken languages for everyday communication...
spoken by the Curonian
Curonians
The Curonians or Kurs were a Baltic tribe living on the shores of the Baltic sea in what are now the western parts of Latvia and Lithuania from the 5th to the 16th centuries, when they merged with other Baltic tribes. They gave their name to the region of Courland , and they spoke the Old...
tribe, who lived mainly on the Courland
Courland
Courland is one of the historical and cultural regions of Latvia. The regions of Semigallia and Selonia are sometimes considered as part of Courland.- Geography and climate :...
peninsula (now western Latvia
Latvia
Latvia , officially the Republic of Latvia , is a country in the Baltic region of Northern Europe. It is bordered to the north by Estonia , to the south by Lithuania , to the east by the Russian Federation , to the southeast by Belarus and shares maritime borders to the west with Sweden...
) and along the nearby Baltic shores.

The language disappeared by the 17th century, leaving substrata in western dialects of the Latvian
Latvian language
Latvian is the official state language of Latvia. It is also sometimes referred to as Lettish. There are about 1.4 million native Latvian speakers in Latvia and about 150,000 abroad. The Latvian language has a relatively large number of non-native speakers, atypical for a small language...
and Lithuanian
Lithuanian language
Lithuanian is the official state language of Lithuania and is recognized as one of the official languages of the European Union. There are about 2.96 million native Lithuanian speakers in Lithuania and about 170,000 abroad. Lithuanian is a Baltic language, closely related to Latvian, although they...
languages, namely the Samogitian dialect. No written documents in this language are known, but some ancient Lithuanian texts from western regions show some Curonian influence.

As almost nothing of the old Curonian language remains, it is not clear what language family it belongs in. Some authors such as Edgar V. Saks
Edgar V. Saks
Edgar Valter Saks was an Estonian statesman, amateur historian and author. He was Estonian Minister of Public Education in exile from May 8, 1971 until his death...
and Eduard Vääri have pointed out several Curonian words and names which are clearly of Finnic
Finnic languages
The term Finnic languages often means the Baltic-Finnic languages, an undisputed branch of the Uralic languages. However, it is also commonly used to mean the Finno-Permic languages, a hypothetical intermediate branch that includes Baltic Finnic, or the more disputed Finno-Volgaic languages....
origin. For example, a treaty from 1230 calls Curonian administrative divisions kiligunden (kihelkond in Estonian
Estonian language
Estonian is the official language of Estonia, spoken by about 1.1 million people in Estonia and tens of thousands in various émigré communities...
) and Curonian army maleva
Malev (military unit)
A malev is an ancient Estonian military unit led by a senior officer that is subordinate to an infantry division. A malev was originally based on a manpower of county and was led by a county vanem. Malev is bigger than a pataljon but smaller than a diviis...
. The elder who signed the treaty was named Lammechinus (resp. Lemminkäinen
Lemminkäinen
Lemminkäinen or Lemminki is a prominent figure in Finnish mythology. He is one of the Heroes of the Kalevala, where his character is a composition of several separate heroes of oral poetry. He is usually depicted as young and good looking, with wavy blonde hair.The original, mythological...
). Self-denomination of Curonians, kure, means 'grus
Grus (genus)
Grus is a genus of large birds in the crane family.-Species:* Common Crane, Grus grus* Sandhill Crane, Grus canadensis** Lesser Sandhill Crane or Little Brown Crane, Grus canadensis...
' in Estonian.

After the dissolution of the Soviet Union
Dissolution of the Soviet Union
The dissolution of the Soviet Union was the disintegration of the federal political structures and central government of the Union of Soviet Socialist Republics , resulting in the independence of all fifteen republics of the Soviet Union between March 11, 1990 and December 25, 1991...
, the Baltic states saw a revival of scientific and cultural interest in the extinct Baltic languages and tribes, including Yotvingian
Yotvingians
Yotvingians or Sudovians were a Baltic people with close cultural ties to the Lithuanians and Prussians...
, Curonian, and Old Prussian
Old Prussians
The Old Prussians or Baltic Prussians were an ethnic group, autochthonous Baltic tribes that inhabited Prussia, the lands of the southeastern Baltic Sea in the area around the Vistula and Curonian Lagoons...
. An example is the documentary film
Documentary film
Documentary films constitute a broad category of nonfictional motion pictures intended to document some aspect of reality, primarily for the purposes of instruction or maintaining a historical record...
Tarp 8 vėjų ("Amidst 8 Winds") by Arturas Barysas
Arturas Barysas
Artūras Barysas "Baras" was a Lithuanian "counter-culture" actor, singer, photographer, and filmmaker, known as the father of modern Lithuanian avant-garde....
, about the decline of the Curonian language.

The Curonian language was a highly inflected and archaic language. Its grammar is reconstructed based on Latvian
Latvian grammar
The Latvian language is a moderately inflected language, with complex nominal and verbal morphology. Word order is relatively free, but the unmarked order is SVO. Latvian has pre-nominal adjectives and both prepositions and postpositions...
, Lithuanian
Lithuanian grammar
Lithuanian grammar is the study of rules governing the use of the Lithuanian language. Lithuanian grammar retains many archaic features from Proto-Indo European that have been lost in other Indo-European languages...
and Old Prussian grammars and known Curonian
Courland
Courland is one of the historical and cultural regions of Latvia. The regions of Semigallia and Selonia are sometimes considered as part of Courland.- Geography and climate :...
place-names and New Curonian texts and vocabulary.