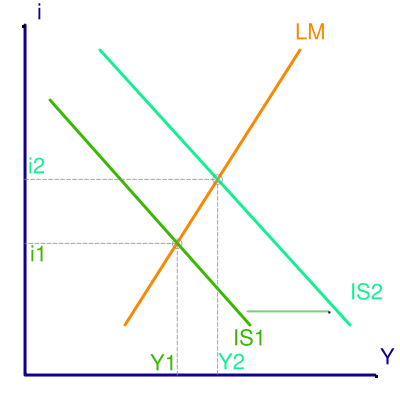 Changes in fiscal policy shifts IS curve, the curve describes equilibrium in the goods market. A Fiscal Expansion shifts IS curve to the right from IS1 to IS2. A fiscal expansion increases equilibrium income from Y1 to Y2 and interest rates from i1 to i2. At unchanged interest rates i1, the higher level of government spending increase the level of Aggregate Demand
Aggregate demand
In macroeconomics, aggregate demand is the total demand for final goods and services in the economy at a given time and price level. It is the amount of goods and services in the economy that will be purchased at all possible price levels. This is the demand for the gross domestic product of a...
. This increase in demand must be met by rise in output. At each level of interest rate, equilibrim income must rise by the multiplier
Multiplier
The term multiplier may refer to:In electrical engineering:* Binary multiplier, a digital circuit to perform rapid multiplication of two numbers in binary representation* Analog multiplier, a device that multiplies two analog signals...
times the increase in government spending.


What factors determine how much crowding out takes place ?


The Classical Case and Crowding Out

If the LM curve is vertical, then an increase in government spending has no effect on the equilibrium income and only increases the interest rates. If the demand for money is not related to the interest rate, as the vertical LM curve implies, then there is unique level of income at which the money market is in equilibrium.


Is Crowding Out Likely?

The question is how seriously we must take the possibility of crowding out? This is discussed in three points given below.

In an economy with unemployed resources there will not be full crowding out because LM curve is not vertical. A fiscal expansion will raise interest rates, but income will also rise. Crowding out, thus, is a matter of degree.

With unemployment in the economy, there is possibility for output to expand, interest rates will not rise at all when government spending rises and there not be any crowding out. This is true because the monetary authorities can accommodate the fiscal expansion by an increase in the money supply, thus preventing interest rates to rise. This monetary accomodation is referred to as Monetizing Budget Deficits, meaning central bank prints more money to buy the bonds with which the government pays for its deficit. In this case, both IS - LM curve shift to right, increasing output at same interest rate. Accordingly, there need not be any adverse effects on investment.
The source of this article is wikipedia, the free encyclopedia.  The text of this article is licensed under the GFDL.