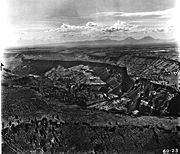 Crooked River National Grassland is a National Grassland located in Jefferson County
Jefferson County, Oregon
Jefferson County is a county located in the U.S. state of Oregon. In 2010, its population was 21,720. It is named after Mount Jefferson. The seat of the county is Madras.-History:...
in the north-central part of the U.S. state
U.S. state
A U.S. state is any one of the 50 federated states of the United States of America that share sovereignty with the federal government. Because of this shared sovereignty, an American is a citizen both of the federal entity and of his or her state of domicile. Four states use the official title of...
of Oregon
Oregon
Oregon is a state in the Pacific Northwest region of the United States. It is located on the Pacific coast, with Washington to the north, California to the south, Nevada on the southeast and Idaho to the east. The Columbia and Snake rivers delineate much of Oregon's northern and eastern...
. It has a land area of 112,357 acre
Acre
The acre is a unit of area in a number of different systems, including the imperial and U.S. customary systems. The most commonly used acres today are the international acre and, in the United States, the survey acre. The most common use of the acre is to measure tracts of land.The acre is related...
s (175.56 sq mi, or 454.69 km²). It contains two National Wild and Scenic River
National Wild and Scenic River
National Wild and Scenic River is a designation for certain protected areas in the United States.The National Wild and Scenic Rivers Act was an outgrowth of the recommendations of a Presidential commission, the Outdoor Recreation Resources Review Commission...
s, the Deschutes River and the Crooked River
Crooked River (Oregon)
The Crooked River is a tributary, long, of the Deschutes River in the U.S. state of Oregon. The river begins at the confluence of South Fork Crooked River and Beaver Creek. Of the two tributaries, the South Fork Crooked River is the larger and is sometimes considered part of the Crooked River proper...
. The grassland is managed together with Ochoco National Forest
Ochoco National Forest
The Ochoco National Forest is located in Central Oregon in the United States, north and east of the City of Prineville, location of the National Forest Headquarters. It encompasses of rimrock, canyons, geologic oddities, dense pine forests, and high desert terrain, as well as the headwaters of...
from Forest Service offices in Prineville
Prineville, Oregon
Prineville is a city in and the county seat of Crook County, Oregon, United States. It was named for the first merchant located in the present location, Barney Prine. The population was 9,253 at the 2010 census.- History :...
. There are local ranger
National Park Ranger
National Park Service Rangers are among the uniformed employees charged with protecting and preserving areas set aside in the National Park System by the United States Congress and/or the President of the United States...
district offices located in Madras
Madras, Oregon
Madras is a city in Jefferson County, Oregon, United States. Originally called The Basin after the circular valley the city is located in, it is unclear as to whether Madras was named in 1903 for the cotton fabric called "Madras" that originated in the Madras area in India, or from the city of...
, its nearest city.