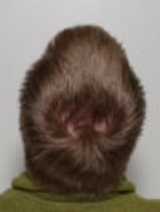 See also hair whorl
Hair whorl
A hair whorl is a patch of hair growing in the opposite direction of the rest of the hair. Hair whorls occur in most hairy animals, on the body as well as on the head. Hair whorls, also known as crowns, swirls, trichoglyphs, or cowlicks, can be either clockwise or counterclockwise in direction of...
.


A cowlick is a section of hair that stands straight up or lies at an angle at odds with the style in which the rest of an individual's hair is worn. Cowlicks appear when the growth direction of the hair
Hair
Hair is a filamentous biomaterial, that grows from follicles found in the dermis. Found exclusively in mammals, hair is one of the defining characteristics of the mammalian class....
forms a spiral pattern. The term "cowlick" originates from the domestic bovine's habit of licking its young, which results in a swirling pattern in the hair. The most common site of a human cowlick is in the crown, but they can show up anywhere. They also sometimes appear in the front and back of the head.

People tend to have at least two hair whorls with one being dominant and clearly visible while the other is less obvious. In the center of the hair whorl you can see the hairs protruding from the scalp. When combed against the grain of the hair, the hair in the center of the cowlick will stand up straight. When left too long the cowlick will create a flat spot, when left too short it will stand up.

Cowlicks are more obvious in straight, thick hair. In people with straight coarse hair the scalp will show in the center of the whorl because the light penetrates to the scalp. Both men and women have cowlicks, which can be covered by longer hair so the whorl is not visible.

One theory is that a cowlick stems from a circular arrangement of the collagen fibers in the cranial fascia of the area of the cowlick, this arrangement is different from the normal, straight pattern.

Many people find cowlicks to be irritating, as they often conflict with the desired hairstyle. There are several methods of taming an unruly cowlick. For most people, a combination of the right hairstyle, length, product used, and styling technique can overcome the appearance. For people more serious about cowlick management, more drastic measures may be used. Electrology
Electrology
Electrology is the practice of electrical epilation to permanently remove human hair. The actual process of removing the hair is referred to as electrolysis.-Overview:...
, waxing
Waxing
Waxing is a method of semi-permanent hair removal which removes the hair from the root. New hair will not grow back in the previously waxed area for two to eight weeks, although some people will start to see regrowth in only a week. Almost any area of the body can be waxed, including eyebrows,...
, and even cosmetic surgery can be used to more permanently correct the cowlick.
The source of this article is wikipedia, the free encyclopedia.  The text of this article is licensed under the GFDL.