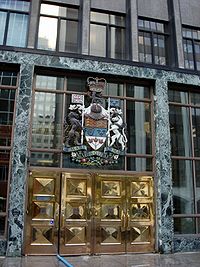 The Court of Queen's Bench of Alberta (abbreviated in citations
Legal citation
Legal citation is the practice of crediting and referring to authoritative documents and sources. The most common sources of authority cited are court decisions , statutes, regulations, government documents, treaties, and scholarly writing....
as ABQB or Alta. Q.B.) is the superior court
Superior court
In common law systems, a superior court is a court of general competence which typically has unlimited jurisdiction with regard to civil and criminal legal cases...
of the Canadian province of Alberta
Alberta
Alberta is a province of Canada. It had an estimated population of 3.7 million in 2010 making it the most populous of Canada's three prairie provinces...
.
The original Building has since been demolished and the Court of Queen's Bench of Alberta in Calgary has been relocated to the Calgary Courts Centre
Calgary Courts Centre
Calgary Courts Centre is an institutional tower in downtown Calgary, Alberta. It was constructed by the Government of Alberta and provides over 1 million square feet of court and office space.-History:...

The Court consists of a Chief Justice
Chief Justice
The Chief Justice in many countries is the name for the presiding member of a Supreme Court in Commonwealth or other countries with an Anglo-Saxon justice system based on English common law, such as the Supreme Court of Canada, the Constitutional Court of South Africa, the Court of Final Appeal of...
of the Court, an Associate Chief Justice, and several judges including those judges who have elected supernumerary
Supernumerary
A Supernumerary is an additional member of an organization. A supernumerary is also a non-regular member of a staff, a member of the staff or an employee who works in a public office who is not part of the manpower complement...
status after many years of service and after having attained eligibility for retirement (typically at age 65).

The province is divided into 11 districts with court sitting in 13 different locations (some districts have a primary and a secondary locations). In 2010 the locations were:

Although provincial superior courts are administered by the provinces, they are considered to be section 96 courts (from section 96 of the Constitution Act, 1867
Constitution Act, 1867
The Constitution Act, 1867 , is a major part of Canada's Constitution. The Act created a federal dominion and defines much of the operation of the Government of Canada, including its federal structure, the House of Commons, the Senate, the justice system, and the taxation system...
). Therefore, appointments to the Court are within federal jurisdiction and made by cabinet
Cabinet of Canada
The Cabinet of Canada is a body of ministers of the Crown that, along with the Canadian monarch, and within the tenets of the Westminster system, forms the government of Canada...
.

The Court of Queen's Bench Act sets out the styling convention of the Court in section 2(2). During the reign of a Queen, it is known as the Court of Queen's Bench of Alberta. Should the monarchy
Monarchy
A monarchy is a form of government in which the office of head of state is usually held until death or abdication and is often hereditary and includes a royal house. In some cases, the monarch is elected...
be vested in a King, it will be known as the Court of King's Bench of Alberta.


Former Chief Justices of the Court