During the 1905 Revolution, the formerly absolutist regime of Tsar Nicholas II was persuaded to adopt a form of constitutionalism, in an effort to preserve itself and keep the nation from sliding into all-out anarchy. The Tsar first issued what became known as the October Manifesto
October Manifesto
The October Manifesto was issued on 17 October, 1905 by Tsar Nicholas II of Russia under the influence of Count Sergei Witte as a response to the Russian Revolution of 1905....
on October 17, 1905, promising basic civil rights and the creation of a parliament, without whose approval no laws were to be enacted in Russia. A new Fundamental Law of the Russian Empire was issued on April 23rd of the following year, in which the State Duma was established as the lower chamber of a two-housed Russian Parliament (the State Council forming the upper house). This Duma thus became the first genuine attempt at parliamentary government in Russia. Whereas the Council of State was partly appointed by the Tsar and partly elected by various governmental, commercial and clerical organizations, the Duma was to be elected by various classes of the Russian people, through a complex system of indirect elections. Initially, the electoral system was drawn up to give a sizable number of electors to the peasant
Peasant
A peasant is an agricultural worker who generally tend to be poor and homeless-Etymology:The word is derived from 15th century French païsant meaning one from the pays, or countryside, ultimately from the Latin pagus, or outlying administrative district.- Position in society :Peasants typically...
s, who were seen as loyal to the Tsarist regime.

While many revolutionaries rejected the Tsar's concessions, most Russians decided to give the new system a chance. However, public faith in the new order was shaken by a fresh Manifesto, issued on February 20, 1906 ahead of the new Fundamental Law, which severely limited the rights of the newly-constituted Duma. Since the Tsar's absolute power did not formally end until his promulgation of the Fundamental Law itself (on April 23, 1906), the legality of this act could not be challenged by the new legislature. Furthermore, the newly-promised civil liberties—freedom of press, assembly and expression, among others—had been greatly reduced during anti-revolutionary operations in that same year.

The First Duma was opened by Nicholas II on April 27, 1906 with his speech from the throne in the Winter Palace. While Nicholas and his ministers hoped to keep the Duma quiescent, the deputies refused to cooperate: they introduced bills for agrarian reform, which were strenuously opposed by the landlords, together with other radical legislative proposals far beyond anything the Tsarist regime was prepared to accept. The Tsar dissolved the First Duma on July 22, 1906, but since elections for the Second Duma returned even more radicals than before, the impasse between legislature and executive continued. About 20% of seats in the Second Duma were taken by Socialists: Mensheviks, Bolsheviks (both factions of the Russian Social Democratic Labor Party), Popular Socialists and Socialist Revolutionaries, all of whom had boycotted the elections for the First Duma. Unable to build a working relationship with the new Duma, the Tsar's government, under newly-appointed Prime Minister Pyotr Stolypin
Pyotr Stolypin
Pyotr Arkadyevich Stolypin served as the leader of the 3rd DUMA—from 1906 to 1911. His tenure was marked by efforts to repress revolutionary groups, as well as for the institution of noteworthy agrarian reforms. Stolypin hoped, through his reforms, to stem peasant unrest by creating a class of...
, set about finding a excuse to dissolve it. 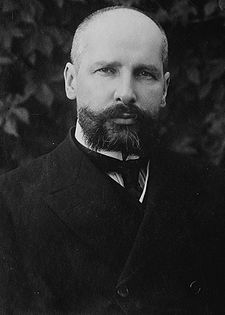 The desired pretext came when the government became aware of ongoing revolutionary agitation among Tsarist soldiers; this agitation was often carried out by the members of the RSDLP. On June 2, the imperial government demanded that the Duma hand over 55 Social Democratic deputies, who had (like all the members of the Duma) been guaranteed parliamentary immunity
Parliamentary immunity
Parliamentary immunity, also known as legislative immunity, is a system in which members of the parliament or legislature are granted partial immunity from prosecution. Before prosecuting, it is necessary that the immunity be removed, usually by a superior court of justice or by the parliament itself...
by the Fundamental Law, unless stripped of it by the legislature itself. Impatient at the Duma's lack of cooperation, it chose to arrest them anyway on the night of June 3, without awaiting the decision of a Duma commission set up to investigate the government's accusations. On June 3 the Duma was formally dissolved by Imperial Manifesto followed by Imperial edict (ukase
Ukase
A ukase , in Imperial Russia, was a proclamation of the tsar, government, or a religious leader that had the force of law...
), with Prime Minister Stolypin playing an important role in this act.

This action, which was perfectly legal according to the Fundamental Law (which gave the Tsar unlimited authority to dismiss the Duma at any time, for any reason that suited him), was followed by a dubious political maneuver. On June 3 a new electoral law was published, entirely on the Tsar's authority and without the consent of the Legislature. According to the new scheme, the wealthier landlords obtained sixty percent of the electors for the Duma; peasants got twenty-two percent, while merchants got fifteen percent and the remaining three percent went to the urban proletariat
Proletariat
The proletariat is a term used to identify a lower social class, usually the working class; a member of such a class is proletarian...
. Areas such as Central Asia
Central Asia
Central Asia is a core region of the Asian continent from the Caspian Sea in the west, China in the east, Afghanistan in the south, and Russia in the north...
were deprived of representation altogether, with the Tsar claiming that the new Duma must be "Russian in spirit", and that non-Russians must never be accorded a "decisive influence" over "purely Russian questions".

The legality of this act was immediately challenged: according to the October Manifesto, new laws could not be enacted without the approval of the Duma, and neither Nicholas nor Stolypin has obtained the Duma's agreement prior to issuing this decree. The Fundamental Law did permit the Tsar to implement or change new laws without the Duma's consent, in intervals between sessions of the Duma (which is when the "coup" law was enacted), but these were supposed to be submitted to the new Duma within two months, and were subject to that Duma's power to suspend or repeal them. Furthermore, no such edict could ever make any changes in the Fundamental Law itself; that required not just the emperor's initiative, but the Duma's approval as well. Hence, the Tsar's new electoral statute had been enacted contrary to his own Fundamental Law. This raised the question of whether Russia was fundamentally a state ruled under an immutable organic statute (the Fundamental Law), or one still ruled by an all-powerful monarch.

The Tsar's government countered by insisting that since the Emperor had granted the Fundamental Law to begin with, he had the God-given right to unilaterally alter it (even though the Fundamental Law clearly said otherwise) in extraordinary instances, such as Nicholas claimed this to be. The manifesto of June 3, 1907 announcing this change specifically appealed to the Tsar's "historical authority" as the legal basis for these changes, which Nicholas asserted "cannot be enacted through the ordinary legislative route," since the Second Duma had been "pronounced unsatisfactory" by him. The Tsar clearly indicated that his own authority, which he claimed to have received from God
God
God is the English name given to a singular being in theistic and deistic religions who is either the sole deity in monotheism, or a single deity in polytheism....
himself, superseded the authority of any law—even the Fundamental Law itself—which he himself had granted. This convinced many Russians that Nicholas had never embraced constitutionalism to begin with, and that Russia ultimately remained an absolute autocracy
Autocracy
An autocracy is a form of government in which one person is the supreme power within the state. It is derived from the Greek : and , and may be translated as "one who rules by himself". It is distinct from oligarchy and democracy...
hiding behind the facade of a constitution. Thus the term "coup" came to be used to refer to the emperor's act, even though it was not a coup de etat in the usual sense.

Contrary to the expectations (and the hopes) of some deputies, the so-called "coup d'état" of June 1907 did not cause the resumption of the revolutionary movement. While SR
Socialist-Revolutionary Party
thumb|right|200px|Socialist-Revolutionary election poster, 1917. The caption in red reads "партия соц-рев" , short for Party of the Socialist Revolutionaries...
s resumed the acts of individual terror
Individual terror
In leftist terminology, individual terror, a form of revolutionary terror, is the murder of isolated individuals with the goal of promotion of a political movement, of provoking political changes, up to political revolution. As such, it differs from other forms of targeted killing, in particular,...
, the number of such acts was relatively small. Since Russia remained relatively quiet, even in the face of the Tsar's contravening of the new Russian Constitution, June 3, 1907 is considered the date of the end of the first Russian revolution. The Tsar's new electoral law ensured that all future Dumas would remain under the control of the higher classes of society, though this did not ultimately prevent the Duma from taking an important role in the Tsar's eventual overthrow in the February Revolution of 1917.
Nicholas' heavy-handed actions in the "coup" crisis irreparably damaged his image (already battered from previous policies he had pursued). This, in turn, caused many of his subjects to eagerly embrace the next revolution when it finally came.