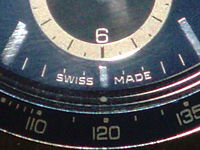 
Country of origin as a marketing strategy

From a marketing perspective, country of origin is a way to differentiate
Product differentiation
In economics and marketing, product differentiation is the process of distinguishing a product or offering from others, to make it more attractive to a particular target market. This involves differentiating it from competitors' products as well as a firm's own product offerings...
the product from the competitors. Schooler (1965) is generally considered as the first researcher to empirically study this effect. He found out that products, identical in every respect except for their country-of-origin, were perceived differently by consumers. Since then, more than 1000 studies have been published on this subject. This research shows that the country of origin has an impact on consumers' quality perceptions of a product, as well as ultimately preference for and willingness to buy that product. Furthermore, several studies have shown that consumers tend to have a relative preference to products from their own country or may have a relative preference for or aversion against products that originate from certain countries (so-called affinity and animosity countries). The effect of country of origin is however debated, with some studies questioning the relevance of academic research on country-of-origin effects for business managers. Overall, academics seem to conclude that the country with which a product is associated with, the so-called country-of-association significantly impacts consumers' product evaluations and choice, but that given the number of publications available, care should be given whether yet another study on that effect is needed.

The requirements for Country of Origin markings are complex and depend both domestic rules permitting the designation 'Made in X', 'Product of X' etc.; and the import country requirements for disclosure.

While many products made within the European Union
European Union
The European Union is an economic and political union of 27 independent member states which are located primarily in Europe. The EU traces its origins from the European Coal and Steel Community and the European Economic Community , formed by six countries in 1958...
carry the country of origin label or marking "Made in EU" or "Made in EC", some disreputable manufacturers in European countries that are not part of the EU may use "Made in Europe". A similar marking, "Made for Europe", is used by some manufacturers outside Europe. These vague and sometimes deliberately confusing labels can lead to consumer deception, whereby buyers not proficient in English may come to believe from looking at the label that the non-European product they are interested in is made in Europe. Similar labels are 'Made in/for North America', 'German Designed' - but manufactured and assembled elsewhere, and the infamous 'Made in PRC' label briefly used to disguise the Chinese origin of said product.


Country of origin in international trade

Today, many products are an outcome of a large number of parts and pieces that come from many different countries, and that may then be assembled together in a third country. In these cases, it's hard to know exactly what is the country of origin, and different rules apply as to how to determine their "correct" country of origin. Generally, articles only change their country of origin if the work or material added to an article in the second country constitutes a substantial transformation, or, the article changes its name, tariff code, character or use (for instance from wheel to car). Value added in the second country may also be an issue.

Country of origin in movie and television production

The International Federation of Film Archives defines the country of origin as the country of the principal offices of the production company or individual by whom the moving image work was made. No consistent reference or definition exists. Sources include the item itself, accompanying material (e.g. scripts, shot lists, production records, publicity material, inventory lists, synopses etc.), the container (if not an integral part of the piece), or other sources (standard and special moving image reference tools). In law, definitions of "country of origin" and related terms are defined differently in different jurisdictions. Europe, Canada, and the United States have different definitions for a variety of reasons, including tax treatment, advertising regulations, distribution; even within the European Union, different member states have different legislation. As a result, an individual work can have multiple countries as its "country of origin", and may even have different countries recognized as originating places for the purpose of different legal jurisdictions. Under copyright law in the United States and other signatories of the Berne Convention, "country of origin" is defined in an inclusive way to ensure the protection of intellectual rights of writers and creators.