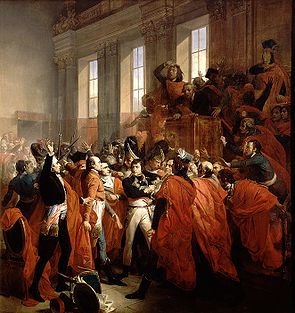 The Council of Five Hundred (Conseil des Cinq-Cents), or simply the Five Hundred was the lower house
Lower house
A lower house is one of two chambers of a bicameral legislature, the other chamber being the upper house.Despite its official position "below" the upper house, in many legislatures worldwide the lower house has come to wield more power...
of the legislature of France during the period commonly known (from the name of the executive branch during this time) as the Directory
French Directory
The Directory was a body of five Directors that held executive power in France following the Convention and preceding the Consulate...
(Directoire), from 22 August 1795 until 9 November 1799, roughly the second half of the period generally referred to as the French Revolution
French Revolution
The French Revolution , sometimes distinguished as the 'Great French Revolution' , was a period of radical social and political upheaval in France and Europe. The absolute monarchy that had ruled France for centuries collapsed in three years...
.

Each member had to be at least 30 and a third of them would be replaced annually.

Napoleon Bonaparte led a group of grenadiers who drove the Council from its chambers and installed himself as leader of France as its First Consul in the coup of 18 Brumaire
18 Brumaire
The coup of 18 Brumaire was the coup d'état by which General Napoleon Bonaparte overthrew the French Directory, replacing it with the French Consulate...
.
The source of this article is wikipedia, the free encyclopedia.  The text of this article is licensed under the GFDL.