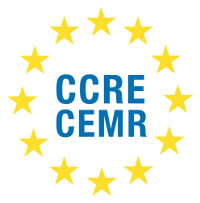 The Council of European Municipalities and Regions (CCRE - CEMR) is the largest organisation of local and regional governments in Europe
European Union
The European Union is an economic and political union of 27 independent member states which are located primarily in Europe. The EU traces its origins from the European Coal and Steel Community and the European Economic Community , formed by six countries in 1958...
. Its members are national associations of towns, municipalities and regions from 39 countries. Together these associations represent about 100,000 local and regional authorities.

The organisation was founded in Geneva
Geneva
Geneva In the national languages of Switzerland the city is known as Genf , Ginevra and Genevra is the second-most-populous city in Switzerland and is the most populous city of Romandie, the French-speaking part of Switzerland...
in 1951 by a group of European mayors. Regions were later allowed to join as well, hence the name Council of European Municipalities and Regions.

At the head of its political structure is its President, currently the mayor of Stuttgart
Stuttgart
Stuttgart is the capital of the state of Baden-Württemberg in southern Germany. The sixth-largest city in Germany, Stuttgart has a population of 600,038 while the metropolitan area has a population of 5.3 million ....
, Wolfgang Schuster
Wolfgang Schuster
Wolfgang Schuster has been the Lord Mayor of Stuttgart, Germany, since January 1997. He is the successor to Manfred Rommel and a member of the CDU.-Studies and early positions:...
. It has a staff of about 20 headed by its secretary general Frédéric Vallier.

CEMR's task is to promote a united Europe, based on locally and regionally autonomous government and democracy. To this end, it endeavours to shape the future of Europe by enhancing local and regional contributions, to influence European law and policy, to exchange experience at the local and regional levels and to cooperate with partners in other parts of the world.

CEMR is active in a number of political fields, including regional policy, transport, the environment, equal opportunities and governance. Its committees and working groups seek to influence draft EU
European Union
The European Union is an economic and political union of 27 independent member states which are located primarily in Europe. The EU traces its origins from the European Coal and Steel Community and the European Economic Community , formed by six countries in 1958...
legislation in order that the interests and concerns of local and regional authorities are taken into account from the earliest stages of the EU legislative process.

Local entities contribute to CEMR’s calendar of activities by organising seminars and conferences on a wide range of issues to promote the exchange and dissemination of experience at the local and regional levels.

CEMR is also deeply involved in building an extensive European town twinning network. Today, there are over 30,000 twinning projects linking towns from all over Europe. This process is improved through CEMR's close cooperation with the DG Education and Culture of the European Commission.

Local and regional governments are invited to sign the charter to make a formal public commitment to the principle of equality between men and women and to implement the charter within their territory.

According to CEMR town twinning has always been a vital way to bring Europe closer to its citizens beyond national boundaries.

In May 2007, CEMR organised a conference on Twinning for tomorrow's world in Rhodes. Over 600 representatives of local governments from across Europe met to discuss issues like new types of twinning; obtaining financial support; and how twinning can contribute to social inclusion. In September 2011, CEMR is organising in Rybnik (Poland) a European congress on citizenship and twinning. It will provide participants with the possibility to discover the next generation of partnerships between local and regional governments and their citizens; explore how to foster the development of a more “grassroots democracy” and to participate in a consultation on citizenship.
A new website dedicated to town twinning has also been launched. It is available in 23 languages and consists of two parts: one bringing together background and topical information about twinning, and the other enabling local governments to find twinning partners online.