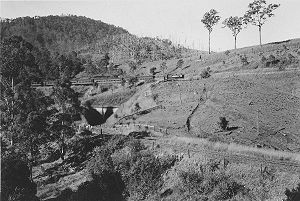 The Cougal Spiral is a feature of the North Coast Railway
North Coast railway line, New South Wales
The North Coast Line is the primary rail route in the Mid North Coast and Northern Rivers regions of New South Wales, and forms a major part of the Sydney-Brisbane rail corridor....
in Australia
Australia
Australia , officially the Commonwealth of Australia, is a country in the Southern Hemisphere comprising the mainland of the Australian continent, the island of Tasmania, and numerous smaller islands in the Indian and Pacific Oceans. It is the world's sixth-largest country by total area...
that connects New South Wales
New South Wales
New South Wales is a state of :Australia, located in the east of the country. It is bordered by Queensland, Victoria and South Australia to the north, south and west respectively. To the east, the state is bordered by the Tasman Sea, which forms part of the Pacific Ocean. New South Wales...
with Queensland
Queensland
Queensland is a state of Australia, occupying the north-eastern section of the mainland continent. It is bordered by the Northern Territory, South Australia and New South Wales to the west, south-west and south respectively. To the east, Queensland is bordered by the Coral Sea and Pacific Ocean...
through Richmond Gap. The railway lines needs to climb at a steady ruling gradient
Ruling gradient
The term "ruling grade" is usually used as a synonym for "steepest climb" between two points on a railroad. But if the steepest climb is, say, a quarter-mile of 2% upgrade preceded and followed by 1.5% grade the "ruling grade" can only be defined arbitrarily....
from Kyogle
Kyogle, New South Wales
Kyogle is a town in the Northern Rivers region of northern New South Wales, Australia, in Kyogle Council. At the 2006 census, Kyogle had a population of 2,731 people. It was founded in the 1830s as a lumber camp, and is located north of Sydney, north of Casino on the Summerland Way close to the...
to the summit at a tunnel at the border between the two states. The border is also at the watershed. The line is single tracked
Single track (rail)
A single track railway is where trains in both directions share the same track. Single track is normally used on lesser used rail lines, often branch lines, where the traffic density is not high enough to justify the cost of building double tracks....
.

Climbing almost non-stop at the ruling grade of 1 in 66 or 1.5% (compensated) the line has almost continuous curves of 240 m (787.4 ft) radius. Near Cougal, the alignment finally runs out of valley, and has nowhere to go. Fortunately a convenient hill allows the line to circle back on itself so that it climbs 30 metres (98.4 ft) without having to make any forward progress. Soon after the Border Tunnel under the watershed is reached, and the line descends on the other side. The spiral
Spiral (railway)
A spiral is a technique employed by railways to ascend steep hills.A railway spiral rises on a steady curve until it has completed a loop, passing over itself as it gains height, allowing the railway to gain vertical elevation in a relatively short horizontal distance...
has two short tunnels, one where it passes under itself, plus another through a small spur in the hillside.

The tunnel at the summit is 1600 metres (5,249.3 ft) long. A lower summit, perhaps without the spiral, would be possible with a considerably longer and more expensive summit tunnel, with the possibility of problems with fumes for both the original steam locomotives and the replacement diesel engines.

The Cougal Spiral is easily viewed from parts of the Lions Road
Lions Road
The Lions Road is a road running between the Summerland Way in New South Wales and a junction at the Mount Lindesay Highway near Rathdowney. Strictly speaking, it is the road that joins two pre-existing sections of rural road, namely Wilson Avenue in New South Wales and Running Creek Road in...
. The structure has been heritage listed due to its historical, scientific and architectural rarity.