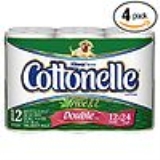 Cottonelle's mascot was originally a woman. At the time, the commercials usually consisted of how soft the roll was by showing a cotton ball and comparing it to the product itself.

In early 2008, Cottonelle devised an extensive advertising campaign featuring a large "Comfort Haven Bus" decorated to resemble a dog. According to Ad Rants, the bus would travel cross-country to "offer visitors access to "relaxation stations" where people can see first-hand—and hopefully in privacy—how soft and comforting Cottonelle can be."

At one point, Cottonelle featured a program called Puppy Points. On a package of Cottonelle toilet paper would be a label with a certain amount of points. The label had to be cut off and saved. The Cottonelle website, showed a list of Cottonelle related items that you could receive in exchange for puppy points, including a Cottonelle bath robe, a Cottonelle picture frame, hand bag, slippers, etc. On July 31, 2008, puppy points were discontinued and could no longer be redeemed for merchandise.

Cottonelle is marketed as Andrex
Andrex
Andrex is a British brand of toilet roll. It is a owned by the American company Kimberly-Clark. The "Andrex Puppy", a Labrador Retriever puppy that appears on the company's television adverts, is synonymous with the brand.Sold in the U.S...
in the UK.

Cottonelle was introduced in Canada shortly after its 1972 introduction in the United States. Due to corporate changes in Canada, during 2004 Scott Paper Limited
Scott Paper Limited
Kruger Products Limited, formerly Scott Paper Limited, is Canada's leading manufacturer and distributor of towel and tissue products for consumer, in-home, use and for commercial, away-from-home, use. Formerly a majority-owned subsidiary of Scott Paper Company, it was acquired by Kruger Inc...
transitioned the highly recognisable Canadian branding to the new name of Cashmere.
The source of this article is wikipedia, the free encyclopedia.  The text of this article is licensed under the GFDL.