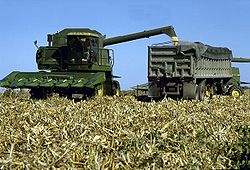 Corn ethanol is ethanol
Ethanol
Ethanol, also called ethyl alcohol, pure alcohol, grain alcohol, or drinking alcohol, is a volatile, flammable, colorless liquid. It is a psychoactive drug and one of the oldest recreational drugs. Best known as the type of alcohol found in alcoholic beverages, it is also used in thermometers, as a...
produced from corn
Maize
Maize known in many English-speaking countries as corn or mielie/mealie, is a grain domesticated by indigenous peoples in Mesoamerica in prehistoric times. The leafy stalk produces ears which contain seeds called kernels. Though technically a grain, maize kernels are used in cooking as a vegetable...
as a biomass
Biomass
Biomass, as a renewable energy source, is biological material from living, or recently living organisms. As an energy source, biomass can either be used directly, or converted into other energy products such as biofuel....
through industrial fermentation, chemical processing and distillation. Corn is the main feedstock used for producing ethanol fuel in the United States
Ethanol fuel in the United States
The United States became the world's largest producer of ethanol fuel in 2005. The U.S. produced 13.2 billion U.S. liquid gallons of ethanol fuel in 2010, and together with Brazil, accounted for 88% of that year's global production...
and it is mainly used as an oxygenate
Oxygenate
Oxygenated chemical compounds contain oxygen as a part of their chemical structure. The term usually refers to oxygenated fuels. Oxygenates are usually employed as gasoline additives to reduce carbon monoxide that is created during the burning of the fuel....
to gasoline in the form of low-level blends, and to a lesser extent, as fuel for E85
E85
E85 is an abbreviation for an ethanol fuel blend of up to 85% denatured ethanol fuel and gasoline or other hydrocarbon by volume. E85 is commonly used by flex-fuel vehicles in the US, Canada, and Europe. Some of the benefits of E85 over conventional gasoline powered vehicles include the potential...
flex-fuel vehicles
Flexible-fuel vehicle
A flexible-fuel vehicle or dual-fuel vehicle is an alternative fuel vehicle with an internal combustion engine designed to run on more than one fuel, usually gasoline blended with either ethanol or methanol fuel, and both fuels are stored in the same common tank...
.

There are two main types of corn ethanol production: dry milling and wet milling. The products of each type are utilized in different ways.

In the dry milling process the entire corn kernel is ground into flour and referred to as “meal.” The meal is then slurried by adding water. Enzymes are added to the mash that convert starch to dextrose, a simple sugar. Ammonia
Ammonia
Ammonia is a compound of nitrogen and hydrogen with the formula . It is a colourless gas with a characteristic pungent odour. Ammonia contributes significantly to the nutritional needs of terrestrial organisms by serving as a precursor to food and fertilizers. Ammonia, either directly or...
is added to control the pH
PH
In chemistry, pH is a measure of the acidity or basicity of an aqueous solution. Pure water is said to be neutral, with a pH close to 7.0 at . Solutions with a pH less than 7 are said to be acidic and solutions with a pH greater than 7 are basic or alkaline...
and as a nutrient for the yeast
Yeast
Yeasts are eukaryotic micro-organisms classified in the kingdom Fungi, with 1,500 species currently described estimated to be only 1% of all fungal species. Most reproduce asexually by mitosis, and many do so by an asymmetric division process called budding...
, which is added later. The mixture is processed at high-temperatures to reduce the bacteria levels and transferred and cooled in fermenters. This is where the yeast is added and conversion from sugar to ethanol and carbon dioxide
Carbon dioxide
Carbon dioxide is a naturally occurring chemical compound composed of two oxygen atoms covalently bonded to a single carbon atom...
begins.

The entire process takes between 40 to 50 hours, during which time the mash is kept cool and agitated in order to facilitate yeast activity. After the process is complete, everything is transferred to distillation columns where the ethanol is removed from the “stillage”. The ethanol is dehydrated to about 200 proof using a molecular sieve system and a denaturant such as gasoline is added to render the product undrinkable. With this last addition, the process is complete and the product is ready to ship to gasoline retailers or terminals. The remaining stillage then undergoes a different process to produce a highly nutritious livestock feed. The carbon dioxide released from the process is also utilized to carbonate beverages and to aid in the manufacturing of dry ice.

The process of wet milling takes the corn grain and steeps it in a dilute combination of sulfuric acid and water for 24 to 48 hours in order to separate the grain into many components. The slurry mix then goes through a series of grinders to separate out the corn germ. Corn oil is a by-product of this process and is extracted and sold. The remaining components of fiber, gluten and starch are segregated out using screen, hydroclonic and centrifugal separators.

The gluten protein is dried and filtered to make a corn gluten- meals co-product and is highly sought after by poultry broiler operators as a feed ingredient. The steeping liquor produced is concentrated and dried with the fiber and sold as corn gluten feed to in the livestock industry. The heavy steep water is also sold as a feed ingredient and is used as an environmentally friendly alternative to salt in the winter months. The corn starch and remaining water can then be processed one of three ways: 1) fermented into ethanol, through a similar process as dry milling, 2) dried and sold as modified corn starch, or 3) made into corn syrup.

The production of corn ethanol uses water in two ways – irrigation and processing. There are two types of ethanol processing, wet milling and dry milling, and the central difference between the two processes is how they initially treat the grain. In wet milling, the corn grain is steeped in water, and then separated for processing in the first step. Dry milling, which is more common, requires a different process. According to a report by the National Renewable Energy Laboratory, “Over 80% of U.S. ethanol is produced from corn by the dry grind process.”[3] The dry grind process proceeds as follows:

“Corn grain is milled, then slurried with water to create ‘mash.’ Enzymes are added to the mash and this mixture is then cooked to hydrolyze the starch into glucose sugars. Yeast ferment these sugars into ethanol and carbon dioxide and the ethanol is purified through a combination of distillation and molecular sieve dehydration to create fuel ethanol. The byproduct of this process is known as distiller’s dried grains and solubles (DDGS) and is used wet or dry as animal feed.”[4]

Since most U.S. ethanol is produced from corn and the required electricity from many distilleries comes mainly from coal
Coal
Coal is a combustible black or brownish-black sedimentary rock usually occurring in rock strata in layers or veins called coal beds or coal seams. The harder forms, such as anthracite coal, can be regarded as metamorphic rock because of later exposure to elevated temperature and pressure...
plants, there has been considerable debate about how sustainable corn-based bio-ethanol could be in replacing fossil fuels in vehicles. Controversy and concerns relate to the large amount of arable land required for crops and its impact on grain supply, direct and indirect land use change effects, as well as issues regarding its energy balance and carbon intensity considering the full life cycle
Life cycle assessment
A life-cycle assessment is a technique to assess environmental impacts associated with all the stages of a product's life from-cradle-to-grave A life-cycle assessment (LCA, also known as life-cycle analysis, ecobalance, and cradle-to-grave analysis) is a technique to assess environmental impacts...
of ethanol production, and also issues regarding water use and pollution due to the increase expansion of ethanol production.

The initial assumption that biofuel
Biofuel
Biofuel is a type of fuel whose energy is derived from biological carbon fixation. Biofuels include fuels derived from biomass conversion, as well as solid biomass, liquid fuels and various biogases...
s were good for the environment because they had a smaller carbon footprint
Carbon footprint
A carbon footprint has historically been defined as "the total set of greenhouse gas emissions caused by an organization, event, product or person.". However, calculating a carbon footprint which conforms to this definition is often impracticable due to the large amount of data required, which is...
is in debate because it is possible that the production of grain alcohol, and therefore E85, may actually have a greater environmental impact than fossil fuel.

That view says that one must consider:

The U.S. Department of Energy has published facts stating that current corn-based ethanol results in a 19% reduction in greenhouse gases, and is better for the environment than other gasoline additives such as MTBE.

Ethanol produced today results in fewer greenhouse gas (GHG) emissions than gasoline and is fully biodegradable, unlike some fuel additives.

Others say that ethanol from corn, as a fuel available now, and cellulostic ethanol in the future, are both much better fuels for the environment. Ethanol derived from sugar-beet as used in Europe or sugar-cane as grown in Brazil in industrial scale is generally seen as having a very positive CO2 balance with up to 80% reduction in well-to-wheel CO2.

A University of Nebraska study in 2009 showed corn ethanol directly emits 51% less greenhouse gas than gasoline. However this study does not take into account the greenhouse gasses involved in production and transportation

The use of ethanol for fuel has had a damaging impact on food markets, especially in poorer countries. In the United States, ethanol is mostly made from yellow corn, and as the market boomed for alternative fuel, yellow corn went up in price. Many farmers saw the potential to make more money, and switched from white corn to yellow corn. White corn is the main ingredient of tortillas in Mexico, and as the supply dropped, the price doubled, making the base of most Mexican foods unaffordable. Many people see this as unacceptable, and want no overlap between food crops and fuel crops. Others point out that the earth is thought to be able to support double the current human population, and press that the resources available, such as unused farmable land, should be better handled.

The Renewable Fuels Association confirm ethanol production does in fact increase the price of corn by increasing demand. It is cited as a positive economic effect for US farmers and tax payers, but does not elaborate on the effect for other populations where field corn is part of the staple diet. "FACT: By increasing the demand for corn, and thus raising corn prices, ethanol helps to lower federal farm program costs. In a January 2007 statement, the USDA Chief Economist stated that farm program payments were expected to be reduced by some $6 billion due to the higher value of a bushel of corn."

Corn production in 2009 reached over 13.2 billion bushels, and a per acre yield jumped to over 165 bushels per acre.


Alternatives to corn as a feedstock

Remnants from food production such as corn stover could be used to produce ethanol instead of food corn. The use of cellulosic biomass to produce ethanol is a new trend in biofuel production. Fuels from these products are considered second generation biofuels and are considered by some to be a solution to the food verses fuel debate. The possibility of using this material has been acknowledged by the scientific community and the political community as well.