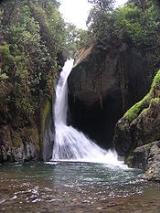 Encyclopedia
The Cordillera de Talamanca is a mountain range that lies on the border between Costa Rica
Costa Rica
Costa Rica , officially the Republic of Costa Rica is a multilingual, multiethnic and multicultural country in Central America, bordered by Nicaragua to the north, Panama to the southeast, the Pacific Ocean to the west and the Caribbean Sea to the east....
and Panama
Panama
Panama , officially the Republic of Panama , is the southernmost country of Central America. Situated on the isthmus connecting North and South America, it is bordered by Costa Rica to the northwest, Colombia to the southeast, the Caribbean Sea to the north and the Pacific Ocean to the south. The...
. Much of the range and the area around it is included in the La Amistad International Park
La Amistad International Park
The La Amistad International Park, or in Spanish , formerly the La Amistad National Park, is an Transboundary Protected Area in Latin America, management of which is shared between Costa Rica and Panama, following a recommendation by UNESCO after the park's inclusion in the World Heritage Site...
, which also is shared between the two countries.

This range contains in the south of Costa Rica stretches from southwest of San José to beyond the border with Panama and contains the highest peaks of Costa Rica and Panama, among them the Cerro Chirripó
Cerro Chirripó
Cerro Chirripó is the highest mountain in Costa Rica, with an altitude of . It is located in the Chirripó National Park and is noted for its ecological wealth. The high peaks in this and La Amistad International Park host important areas of Talamancan montane forest and Costa Rican Páramo with high...
with 3,820 m, and the more accessible high peak of Cerro de la Muerte
Cerro de la Muerte
Cerro de la Muerte is the highest point in the Costa Rican section of the Inter-American Highway. Its name means "Mountain of Death", since in the past crossing the mountains from the Valle Central meant a three or four day journey, on foot or on horseback, and many ill-prepared travelers...
. Much of the Caribbean areas of the range are still unexplored.

The range is covered by the Talamancan montane forests
Talamancan montane forests
The Talamancan montane forests ecoregion, in the tropical moist broadleaf forest biome, are in montane Costa Rica and Panama in Central America.-Setting:...
to elevations of approximately 3000 m. Above elevations of 1800 m these are dominated by huge oak trees (Quercus costaricensis). Above 3000 m, the forests transition to enclaves of sub-páramo, a sort of shrub and dwarf bamboo Chusquea
Chusquea
Chusquea is a genus of bamboo with about 150 species. Most of them are mountain clumping bamboos native from southern Mexico to southern Chile and Argentina. They are sometimes referred to as South American mountain bamboos. Unlike most other bamboos, the stems of these species are solid, not hollow...
dominated scrub, above 3,400 m this becomes Costa Rican páramo
Costa Rican páramo
The Costa Rican páramo, also known as the Talamanca páramo, is a montane grassland and shrubland of Costa Rica and western Panama.-Setting:...
, a tropical alpine grassland. The sub-páramo and páramo vegetation are subject to regular frosts at night, temperatures at 3200 m reaching –5 Celsius. The region has been extensively studied by paleolimnologists to reconstruct the changes in climate, vegetation and fire frequencies (see also Sally P Horn
Sally P Horn
Sally P. Horn is a multi award winning professor at the University of Tennessee, Knoxville. Her work in Costa Rica and other tropical regions has been featured in a number of publications, including National Geographic. She has published over 100 articles relating to paleolimnology and biogeography...
).

The range is of global importance as it is a centre of endemism for many plant and animal groups and as an important habitat for many large mammals (Baird's Tapir
Baird's Tapir
Baird’s Tapir is a species of tapir that is native to Central America and northern South America. It is one of three Latin American species of tapir.-Names:...
, Puma, Jaguar
Jaguar
The jaguar is a big cat, a feline in the Panthera genus, and is the only Panthera species found in the Americas. The jaguar is the third-largest feline after the tiger and the lion, and the largest in the Western Hemisphere. The jaguar's present range extends from Southern United States and Mexico...
) and birds that are now threatened in much of their range.

Several national parks and reservations are located in the Talamanca mountain range, including Chirripó National Park
Chirripó National Park
Chirripó National Park is located in the middle portion of the Talamanca Range of Costa Rica, approximately 30 km northeast from the city of San Isidro del General. It protects a number of important ecosystems on the Costa Rican Pacific slope and is notable for including the largest extension...
. The Cordillera de Talamanca and La Amistad national parks have been designated by UNESCO
UNESCO
The United Nations Educational, Scientific and Cultural Organization is a specialized agency of the United Nations...
a World Heritage site
World Heritage Site
A UNESCO World Heritage Site is a place that is listed by the UNESCO as of special cultural or physical significance...
It is also the first binational biosphere reserve
Biosphere reserve
The Man and the Biosphere Programme of UNESCO was established in 1971 to promote interdisciplinary approaches to management, research and education in ecosystem conservation and sustainable use of natural resources.-Development:...
. The two parks comprise 2,400 square km of land.