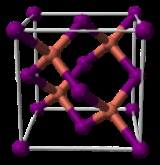 Copper(I) iodide is white, but samples are often tan or even, when found in nature as rare mineral marshite, reddish brown, but such color is due to impurities. It is common for samples of iodide-containing compounds to become discolored because of the easy aerobic oxidation of the iodide anion to iodine.
Copper(I) iodide, like most "binary" (containing only two elements) metal halides, is an inorganic polymer.

What happens when copper iodide is in water? The mechanism also, if you can! Thanks!
More
x