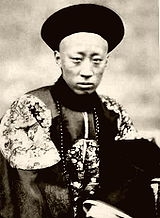 Encyclopedia
The Convention of Peking or the First Convention of Peking is the name used for three different unequal treaties, which were concluded between Qing
Qing Dynasty
The Qing Dynasty was the last dynasty of China, ruling from 1644 to 1912 with a brief, abortive restoration in 1917. It was preceded by the Ming Dynasty and followed by the Republic of China....
China
China
Chinese civilization may refer to:* China for more general discussion of the country.* Chinese culture* Greater China, the transnational community of ethnic Chinese.* History of China* Sinosphere, the area historically affected by Chinese culture...
and the United Kingdom
United Kingdom of Great Britain and Ireland
The United Kingdom of Great Britain and Ireland was the formal name of the United Kingdom during the period when what is now the Republic of Ireland formed a part of it....
, France
Second French Empire
The Second French Empire or French Empire was the Imperial Bonapartist regime of Napoleon III from 1852 to 1870, between the Second Republic and the Third Republic, in France.-Rule of Napoleon III:...
, and Russia
Russian Empire
The Russian Empire was a state that existed from 1721 until the Russian Revolution of 1917. It was the successor to the Tsardom of Russia and the predecessor of the Soviet Union...
.

On 18 October 1860, at the culmination of the Second Opium War
Second Opium War
The Second Opium War, the Second Anglo-Chinese War, the Second China War, the Arrow War, or the Anglo-French expedition to China, was a war pitting the British Empire and the Second French Empire against the Qing Dynasty of China, lasting from 1856 to 1860...
, the British and French troops entered the Forbidden City
Forbidden City
The Forbidden City was the Chinese imperial palace from the Ming Dynasty to the end of the Qing Dynasty. It is located in the middle of Beijing, China, and now houses the Palace Museum...
in Beijing
Beijing
Beijing , also known as Peking , is the capital of the People's Republic of China and one of the most populous cities in the world, with a population of 19,612,368 as of 2010. The city is the country's political, cultural, and educational center, and home to the headquarters for most of China's...
. Following the decisive defeat of the Chinese, Prince Gong was compelled to sign two treaties on behalf of the Qing government with Lord Elgin
James Bruce, 8th Earl of Elgin
Sir James Bruce, 8th Earl of Elgin and 12th Earl of Kincardine, KT, GCB, PC , was a British colonial administrator and diplomat...
and Baron Gros
Jean-Baptiste Louis Gros
Jean-Baptiste Louis Gros was a French ambassador and one of the first daguerrotypists. Baron and French chargé d'affaires in Bogotá , Athens and Ambassador to London - during which period he also travelled to China and Japan in 1857 and 1858 — he produced many famous daguerrotypes — chief among...
, who represented Britain and France respectively. Although Russia had not been a belligerent, Prince Gong also signed a treaty with Nikolay Muravyov-Amursky
Nikolay Muravyov-Amursky
Nikolay Nikolayevich Muravyov-Amursky was a Russian statesman and diplomat, who played a major role in the expansion of the Russian Empire into the Amur River basin and to the shores of the Sea of Japan.-Surname spelling:The surname Muravyov has also been transcribed as Muravyev or Murav'ev.-Early...
.

The original plan was to burn down the Forbidden City as punishment for the mistreatment of European prisoners by Qing officials. Because doing so would jeopardize the treaty signing, the plan shifted to burning the Emperor's garden estates of Qīngyī Yuán
Summer Palace
The Summer Palace is a palace in Beijing, China. The Summer Palace is mainly dominated by Longevity Hill and the Kunming Lake. It covers an expanse of 2.9 square kilometers, three quarters of which is water....
and Yuánmíng Yuán
Old Summer Palace
The Old Summer Palace, known in China as Yuan Ming Yuan , and originally called the Imperial Gardens, was a complex of palaces and gardens in Beijing...
instead. The treaties with France and Britain were signed in the Ministry of Rites building immediately south of the Forbidden City on 24 October 1860. 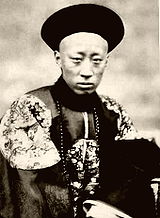 Article 6 of the Convention between China and the United Kingdom stipulated that China was to cede the part of Kowloon Peninsula south of present day Boundary Street
Boundary Street
[[Image:Boundary st hongkong.JPG|thumb|right|250px|Boundary Street near [[Kowloon Tong]]Boundary Street is a three-lane one-way street in [[Kowloon]], [[Hong Kong]]...
, Kowloon
Kowloon
Kowloon is an urban area in Hong Kong comprising the Kowloon Peninsula and New Kowloon. It is bordered by the Lei Yue Mun strait in the east, Mei Foo Sun Chuen and Stonecutter's Island in the west, Tate's Cairn and Lion Rock in the north, and Victoria Harbour in the south. It had a population of...
, and Hong Kong
Hong Kong
Hong Kong is one of two Special Administrative Regions of the People's Republic of China , the other being Macau. A city-state situated on China's south coast and enclosed by the Pearl River Delta and South China Sea, it is renowned for its expansive skyline and deep natural harbour...
(including Stonecutters Island
Stonecutters Island
Stonecutters Island or Ngong Shuen Chau is a former island in Victoria Harbour, Hong Kong. Following land reclamation, it is now annexed to the Kowloon peninsula.-Fauna:...
) in perpetuity to Britain.
The treaty also ceded parts of Outer Manchuria
Outer Manchuria
Outer Manchuria , is the territory ceded by China to Russia in the Treaty of Aigun in 1858 and the Treaty of Peking in 1860. . The northern part of the area was also in dispute between 1643 and 1689...
to the Russian Empire. It granted Russia the right to the Ussuri krai
Ussuri krai
Ussuri krai is an unofficial name for a part of Primorsky Krai and Khabarovsky Krai that consisted of Ussuri and South-Ussuri Okrugs. The name was often used in late Imperial Russia...
, a part of the modern day Primorye
Primorsky Krai
Primorsky Krai , informally known as Primorye , is a federal subject of Russia . Primorsky means "maritime" in Russian, hence the region is sometimes referred to as Maritime Province or Maritime Territory. Its administrative center is in the city of Vladivostok...
, the territory that corresponded with the ancient Manchu
Manchu
The Manchu people or Man are an ethnic minority of China who originated in Manchuria . During their rise in the 17th century, with the help of the Ming dynasty rebels , they came to power in China and founded the Qing Dynasty, which ruled China until the Xinhai Revolution of 1911, which...
province of East Tartary. See Treaty of Aigun
Treaty of Aigun
The Treaty of Aigun was a 1858 treaty between the Russian Empire, and the empire of the Qing Dynasty, the sinicized-Manchu rulers of China, that established much of the modern border between the Russian Far East and Manchuria , which is now known as Northeast China...
(1858), Treaty of Nerchinsk
Treaty of Nerchinsk
The Treaty of Nerchinsk of 1689 was the first treaty between Russia and China. The Russians gave up the area north of the Amur River as far as the Stanovoy Mountains and kept the area between the Argun River and Lake Baikal. This border along the Argun River and Stanovoy Mountains lasted until...
(1689) and Russian-Manchu border conflicts
Russian-Manchu border conflicts
The Russian–Manchu border conflicts were a series of intermittent skirmishes between the Manchus and the Cossacks in which the Cossacks tried and failed to gain the land north of the Amur River...
. The treaty is considered an unequal treaty.

The governments of the United Kingdom
United Kingdom
The United Kingdom of Great Britain and Northern IrelandIn the United Kingdom and Dependencies, other languages have been officially recognised as legitimate autochthonous languages under the European Charter for Regional or Minority Languages...
and the People's Republic of China
People's Republic of China
China , officially the People's Republic of China , is the most populous country in the world, with over 1.3 billion citizens. Located in East Asia, the country covers approximately 9.6 million square kilometres...
(PRC) concluded the Sino-British Joint Declaration on the Question of Hong Kong
Sino-British Joint Declaration
The Sino-British Joint Declaration, formally known as the Joint Declaration of the Government of the United Kingdom of Great Britain and Northern Ireland and the Government of the People's Republic of China on the Question of Hong Kong, was signed by the Prime Ministers, Zhao Ziyang and Margaret...
in 1984, under which the sovereignty of the leased territories, together with Hong Kong Island
Hong Kong Island
Hong Kong Island is an island in the southern part of the Hong Kong Special Administrative Region. It has a population of 1,289,500 and its population density is 16,390/km², as of 2008...
, ceded under the Treaty of Nanking
Treaty of Nanking
The Treaty of Nanking was signed on 29 August 1842 to mark the end of the First Opium War between the United Kingdom of Great Britain and Ireland and the Qing Dynasty of China...
(1842), and Kowloon Peninsula
Kowloon Peninsula
The Kowloon Peninsula is a peninsula that forms the southern part of the main landmass in the territory of Hong Kong. The Kowloon Peninsula and the area of New Kowloon are collectively known as Kowloon....
(south of Boundary Street), was scheduled to be transferred to the PRC on 1 July 1997.

The parts of Outer Manchuria ceded to Russia were never returned and remain part of Russia today.