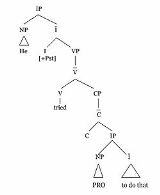 Encyclopedia
In linguistics
Linguistics
Linguistics is the scientific study of human language. Linguistics can be broadly broken into three categories or subfields of study: language form, language meaning, and language in context....
, a control construction (also called equi-NP deletion) is a clause that contains a main clause
Independent clause
An independent clause is a clause that can stand by itself, also known as a simple sentence. An independent clause contains a subject and a predicate; it makes sense by itself....
(or matrix clause), the predicate
Predicate (grammar)
There are two competing notions of the predicate in theories of grammar. Traditional grammar tends to view a predicate as one of two main parts of a sentence, the other being the subject, which the predicate modifies. The other understanding of predicates is inspired from work in predicate calculus...
of which has two complements
Complement (linguistics)
In grammar the term complement is used with different meanings. The primary meaning is a word, phrase or clause that is necessary in a sentence to complete its meaning. We find complements that function as an argument and complements that exist within arguments.Both complements and modifiers add...
— an embedded clause (or subordinate clause) complement and a nominal
Noun
In linguistics, a noun is a member of a large, open lexical category whose members can occur as the main word in the subject of a clause, the object of a verb, or the object of a preposition .Lexical categories are defined in terms of how their members combine with other kinds of...
complement that acts as the semantic argument of the main clause and of the embedded clause. This nominal argument is the controller (or antecedent
Antecedent (grammar)
In grammar, an antecedent is a noun, noun phrase, or clause to which an anaphor refers in a coreference. For example, in the passage "I did not see John because he wasn't there", "John" is the antecedent of the anaphor "he"; together "John" and "he" are called a coreference because they both refer...
). Verbs that occur in control structures are control verbs (or equi verbs).

For example, in the English sentence

the control predicate is tried, a control verb. Its complements are the subject
Subject (grammar)
The subject is one of the two main constituents of a clause, according to a tradition that can be tracked back to Aristotle and that is associated with phrase structure grammars; the other constituent is the predicate. According to another tradition, i.e...
controller George and the embedded nonfinite clause to escape. George is the semantic agent
Agent (grammar)
In linguistics, a grammatical agent is the cause or initiator of an event. Agent is the name of the thematic role...
argument of tried. The verb escape also has an agent argument, but in English this argument does not appear in the embedded clause (i.e. it is covert). Since this is a control structure, the covert argument of escape is the same as the overt argument of tried, which, in this sentence, is George. (In other words, the covert argument is a bound variable
Free variables and bound variables
In mathematics, and in other disciplines involving formal languages, including mathematical logic and computer science, a free variable is a notation that specifies places in an expression where substitution may take place...
.) The only semantic interpretation of this sentence is that the person trying and the person escaping are the same — both are George. An interpretation where George is trying and a different person is escaping is impossible.

One way to represent this is to use a bound variable in the embedded clause that is coreferential
Coreference
In linguistics, co-reference occurs when multiple expressions in a sentence or document refer to the same thing; or in linguistic jargon, they have the same "referent."...
with the controller. This coreference can be show with co-indexation:

Here the bound variable (the covert subject of the embedded) is represented as X. It is also coindexed with the controller George (the subject of the main clause) with a subscript i indicating that they both point to the same referent. In other words, necessarily X = George. Semantically, the meaning of this sentence is George tried (George) to escape. The coindexing also shows that X cannot point to a different referent. It is impossible in this control sentence that X = Baron, for example, which would have the impossible meaning of George tried (Baron) to escape.

In English and many other languages, the embedded clause in a control structure is nonfinite. That is, the embedded clause either has an infinitive
Infinitive
In grammar, infinitive is the name for certain verb forms that exist in many languages. In the usual description of English, the infinitive of a verb is its basic form with or without the particle to: therefore, do and to do, be and to be, and so on are infinitives...
verb or a gerund
Gerund
In linguistics* As applied to English, it refers to the usage of a verb as a noun ....
verb. For example:

However, other languages have embedded clauses that are finite (i.e. the embedded verb is inflected for tense and agreement).

Argument control refers to grammatical principles that allow the semantic identity of a verb's argument
Argument
In philosophy and logic, an argument is an attempt to persuade someone of something, or give evidence or reasons for accepting a particular conclusion.Argument may also refer to:-Mathematics and computer science:...
to be determined even though this argument is not realized phonologically within the syntactic projection of the verb. The most typical instance of argument control involves the unrealized subject of the non-finite verb
Non-finite verb
In linguistics, a non-finite verb is a verb form that is not limited by a subject and, more generally, is not fully inflected by categories that are marked inflectionally in language, such as tense, aspect, mood, number, gender, and person...
al complement of a raising or control verb
Control verb
In linguistics, a control construction is a clause that contains a main clause , the predicate of which has two complements — an embedded clause complement and a nominal complement that acts as the semantic argument of the main clause and of the embedded clause...
. The unrealized subject is typically interpreted as coreferential
Coreference
In linguistics, co-reference occurs when multiple expressions in a sentence or document refer to the same thing; or in linguistic jargon, they have the same "referent."...
with either the subject or the object of the main verb.

For example, in the following sentence, the control verb tried selects a participial
Participle
In linguistics, a participle is a word that shares some characteristics of both verbs and adjectives. It can be used in compound verb tenses or voices , or as a modifier...
complement calling me yesterday:
The subject of calling is not overtly expressed. However, the verb tried requires that its subject and the unrealized subject of its verbal complement be coreferent. In other words, the subject of tried controls the subject of calling: Bill is understood to be the "caller" as well as the "tryer" in this sentence.

In other examples, the identity of the unrealized argument is not determined by the grammatical structure of the sentence. In the following examples, the missing subject of the non-finite verb phrases is interpreted generically, by so-called arbitrary control:

In English and many other languages, control verbs may be classified as either subject control, meaning that it is their (syntactic) subject
Subject (grammar)
The subject is one of the two main constituents of a clause, according to a tradition that can be tracked back to Aristotle and that is associated with phrase structure grammars; the other constituent is the predicate. According to another tradition, i.e...
that is semantically shared, or object control, meaning that it is their (syntactic) object
Object (grammar)
An object in grammar is part of a sentence, and often part of the predicate. It denotes somebody or something involved in the subject's "performance" of the verb. Basically, it is what or whom the verb is acting upon...
that is. For example, try is subject control (as seen above), while convince is object control: in "She convinced him to do that," him is syntactically only the direct object of convinced, but semantically both the patient of convinced and the agent of to do.

Control and raising
Raising verb
In linguistics, raising is a form of argument control in which an argument that belongs semantically to a subordinate clause is realized syntactically as a constituent of a higher clause...
constructions appear to be superficially similar in the surface forms of sentences, but they are actually quite different.


Control Theory in Government and Binding 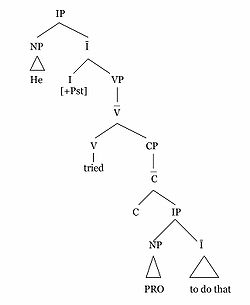 The existence of PRO
PRO (linguistics)
PRO is an empty category whose existence is postulated in classical Government and Binding Theory. There are two independent pieces of evidence for its existence: the Extended Projection Principle and theta criterion :*I persuaded John [PRO to read Al Gore's latest...
([Spec, IP] in the embedded clause) is required by the Extended Projection Principle
Extended projection principle
The Extended Projection Principle is a linguistic hypothesis about the obligatoriness of subjects. It was proposed by Noam Chomsky as an addendum to the Projection principle . The basic idea of the EPP is that clauses must contain an NP in the subject position The Extended Projection Principle...
, which says that all clauses must have a subject. The main characteristic feature of PRO is that it must be ungoverned (the PRO Theorem). In terms of features it is [+anaphor, +pronominal] (see Binding (linguistics)
Binding (linguistics)
In linguistics, binding theory is any of a broad class of theories dealing with the distribution of pronominal and anaphoric elements. The idea that there should be a specialised, coherent theory dealing with this particular set of phenomena originated in work in transformational grammar in the 1970s...
). That is why such sentences as *I expect [John to meet PRO] are ungrammatical: PRO would be theta-governed by the verb.

The expletive test (using non-referential there or it) helps to distinguish between object-control and other types of verbs: