Encyclopedia
The Conte di Cavour class was a battleship
Battleship
A battleship is a large armored warship with a main battery consisting of heavy caliber guns. Battleships were larger, better armed and armored than cruisers and destroyers. As the largest armed ships in a fleet, battleships were used to attain command of the sea and represented the apex of a...
class of the Regia Marina
Regia Marina
The Regia Marina dates from the proclamation of the Kingdom of Italy in 1861 after Italian unification...
in World War I
World War I
World War I , which was predominantly called the World War or the Great War from its occurrence until 1939, and the First World War or World War I thereafter, was a major war centred in Europe that began on 28 July 1914 and lasted until 11 November 1918...
and World War II
World War II
World War II, or the Second World War , was a global conflict lasting from 1939 to 1945, involving most of the world's nations—including all of the great powers—eventually forming two opposing military alliances: the Allies and the Axis...
.

This class was the second group of dreadnought
Dreadnought
The dreadnought was the predominant type of 20th-century battleship. The first of the kind, the Royal Navy's had such an impact when launched in 1906 that similar battleships built after her were referred to as "dreadnoughts", and earlier battleships became known as pre-dreadnoughts...
s in the Regia Marina. The ships were designed by Admiral Edoardo Masdea. 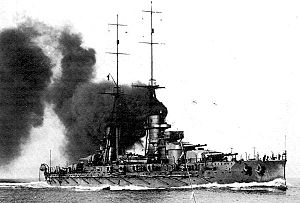