I have a 1989 toyota camry v6 with a inner cv joint boot replacement. The balls & race came apart.i am having difficult time reinstalling the cage an...

I have a 2004 Toyota Rav4. My car starts to vibrate at 40-45mph. The tires have been balanced and checked several times, but several mechanics have co...
More

Constant-velocity joints are protected by a rubber boot, a CV gaiter. Cracks and splits in the boot will allow contaminants in, which would cause the joint to wear quickly.


Before the CV joint

Early front wheel drive systems such as those used on the Citroën
Citroën
Citroën is a major French automobile manufacturer, part of the PSA Peugeot Citroën group.Founded in 1919 by French industrialist André-Gustave Citroën , Citroën was the first mass-production car company outside the USA and pioneered the modern concept of creating a sales and services network that...
Traction Avant
Citroën Traction Avant
The Citroën Traction Avant is an automobile which was produced by the French manufacturer Citroën from 1934 to 1957. About 760,000 units were produced.-Impact on the world:...
and the front axles of Land Rover
Land Rover
Land Rover is a British car manufacturer with its headquarters in Gaydon, Warwickshire, United Kingdom which specialises in four-wheel-drive vehicles. It is owned by the Indian company Tata Motors, forming part of their Jaguar Land Rover group...
and similar four wheel drive vehicles used universal joint
Universal joint
A universal joint, universal coupling, U joint, Cardan joint, Hardy-Spicer joint, or Hooke's joint is a joint or coupling in a rigid rod that allows the rod to 'bend' in any direction, and is commonly used in shafts that transmit rotary motion...
s, where a cross-shaped metal pivot sits between two forked carriers. These are not CV joints as, except for specific configurations, they result in a variation of the angular velocity. They are simple to make and can be tremendously strong, and are still used to provide a flexible coupling in some propshafts, where there is not very much movement. However, they become "notchy" and difficult to turn when operated at extreme angles, and need regular maintenance. They also need more complicated support bearings when used in drive axles, and could only be used in rigid axle designs.

As front wheel drive systems became more popular, with cars such as the BMC
British Motor Corporation
The British Motor Corporation, or commonly known as BMC was a vehicle manufacturer from United Kingdom, formed by the merger of the Austin Motor Company and the Nuffield Organisation in 1952...
Mini
Mini
The Mini is a small car that was made by the British Motor Corporation and its successors from 1959 until 2000. The original is considered a British icon of the 1960s, and its space-saving front-wheel-drive layout influenced a generation of car-makers...
using compact transverse engine layouts, the shortcomings of universal joints in front axles became more and more apparent. Based on a design by Alfred H. Rzeppa
Alfred H. Rzeppa
Alfred Hans Rzeppa was an engineer working at Ford Motor Company who invented a version of constant-velocity joint in 1926. He proposed an improved design in 1936....
which was filed for patent in 1927 (a CV joint, the Tracta joint, designed by Pierre Fenaille at Jean-Albert Grégoire
Jean-Albert Grégoire
Jean-Albert Grégoire was one of the great pioneers of the front-wheel drive car. He contributed to the development of front wheel drive vehicles in two ways...
's Tracta
Tracta
Tracta was a French car maker based in Asnières, Seine, that was active between 1926 and 1934 . They were pioneers of front wheel drive vehicles....
company was filed for patent in 1926), constant velocity joints solved many of these problems. They allowed a smooth transfer of power despite the wide range of angles through which they were bent. 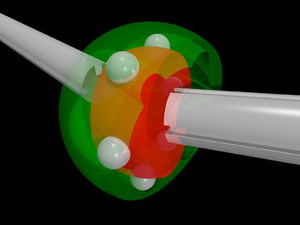 A Rzeppa joint consists of a spherical inner with 6 grooves in it, and a similar enveloping outer shell. Each groove guides one ball. The input shaft fits in the centre of a large, steel, star-shaped "gear" that nests inside a circular cage. The cage is spherical but with ends open, and it typically has six openings around the perimeter. This cage and gear fit into a grooved cup that has a splined and threaded shaft attached to it. Six large steel balls sit inside the cup grooves and fit into the cage openings, nestled in the grooves of the star gear. The output shaft on the cup then runs through the wheel bearing and is secured by the axle nut. This joint can accommodate the large changes of angle when the front wheels are turned by the steering system; typical Rzeppa joints allow 45-48 degrees of articulation, while some can give 52 degrees. At the "outboard" end of the driveshaft a slightly different unit is used. The end of the driveshaft is splined
Rotating spline
Splines are ridges or teethon a drive shaft that mesh with grooves in a mating piece and transfer torque to it, maintaining the angular correspondence between them....
and fits into the outer "joint". It is typically held in place by a circlip
Circlip
A circlip , also known as a C-Clip, snap ring or Jesus clip, is a type of fastener consisting of a semi-flexible metal ring with open ends which can be snapped into place, into a machined groove on a dowel pin or other part to permit rotation but to prevent lateral movement...
.

These joints are used at the inboard end of car driveshafts. This joint has a three-pointed yoke attached to the shaft, which has barrel-shaped roller bearings on the ends. These fit into a cup with three matching grooves, attached to the differential
Differential (mechanics)
A differential is a device, usually, but not necessarily, employing gears, capable of transmitting torque and rotation through three shafts, almost always used in one of two ways: in one way, it receives one input and provides two outputs—this is found in most automobiles—and in the other way, it...
. Since there is only significant movement in one axis, this simple arrangement works well. These also allow an axial 'plunge' movement of the shaft, so that engine rocking and other effects do not preload the bearings. A typical Tripod joint has up to 50 mm of plunge travel, and 26 degrees of angular articulation.

Double Cardan joints are similar to double Cardan shafts, except that the length of the intermediate shaft is shortened as much as is practical, effectively allowing the two Hooke's joints to be mounted back to back. DCJs are typically used in steering columns, as they eliminate the need to correctly phase the universal joints at the ends of the intermediate shaft (IS), which eases packaging of the IS around the other components in the engine bay of the car. They are also used to replace Rzeppa style constant-velocity joints in applications where high articulation angles, or impulsive torque loads are common, such as the driveshafts and halfshafts of rugged four wheel drive vehicles. Double Cardan joints have been developed utilizing a floating centering element to maintain equal angles between the driven and driving shafts. This centering provides true constant velocity operation, but the torque required to accelerate the internals of the joint does generate some additional vibration at higher speeds.

The Thompson constant velocity joint (TCVJ), also known as a Thompson coupling, is a constant velocity universal joint
Universal joint
A universal joint, universal coupling, U joint, Cardan joint, Hardy-Spicer joint, or Hooke's joint is a joint or coupling in a rigid rod that allows the rod to 'bend' in any direction, and is commonly used in shafts that transmit rotary motion...
that can be loaded axially and continue to maintain constant velocity over a range of input and output shaft angles with low friction and vibration. It consists of two cardan joints assembled within each other, thus eliminating the intermediate shaft, along with a control yoke that geometrically constrains their alignment. The control yoke maintains equal joint angles between the input shafts and a relative phase angle of zero to ensure constant angular velocity at all input and output shaft angles. The control yoke employs a spherical pantograph
Pantograph
A pantograph is a mechanical linkage connected in a special manner based on parallelograms so that the movement of one pen, in tracing an image, produces identical movements in a second pen...
scissor mechanism to bisect the angle between the input and output shaft. While the geometric configuration does not maintain constant velocity for the control yoke (aka intermediate coupling) aligning the cardan joints, the control yoke has minimal inertia and generates virtually no vibration. Eliminating the intermediate shaft and keeping the input shafts aligned in the homokinetic plane virtually eliminates the induced shear stress
Shear stress
A shear stress, denoted \tau\, , is defined as the component of stress coplanar with a material cross section. Shear stress arises from the force vector component parallel to the cross section...
es and vibration
Vibration
Vibration refers to mechanical oscillations about an equilibrium point. The oscillations may be periodic such as the motion of a pendulum or random such as the movement of a tire on a gravel road.Vibration is occasionally "desirable"...
inherent in traditional double cardan shafts.

The use of cardan joints within the Thompson Coupling also reduces the wear, heat and friction when compared with Rzeppa type constant velocity joints. Cardan joints, including Thompson couplings, utilise roller bearings running circumferentially
Circumference
The circumference is the distance around a closed curve. Circumference is a special perimeter.-Circumference of a circle:The circumference of a circle is the length around it....
, whereas Rzeppa constant velocity joints use balls which roll and slide axially along grooves. Continuous use of the Thompson Coupling at a straight-through, zero-degree angle causes excess wear and damage to the joint; a minimum offset of 2 degrees is recommended.

The novel feature of the coupling is the method to geometrically constrain the pair of cardan joints within the assembly by using, for example, a spherical four bar scissors linkage (spherical pantograph
Pantograph
A pantograph is a mechanical linkage connected in a special manner based on parallelograms so that the movement of one pen, in tracing an image, produces identical movements in a second pen...
) and it is the first coupling to have this combination of properties.

The coupling earned its inventor, Glenn Thompson, the Australian Society for Engineering in Agriculture Engineering Award.