Encyclopedia
In chemistry
Chemistry
Chemistry is the science of matter, especially its chemical reactions, but also its composition, structure and properties. Chemistry is concerned with atoms and their interactions with other atoms, and particularly with the properties of chemical bonds....
, conformational isomerism is a form of stereoisomerism
Stereoisomerism
Stereoisomers are isomeric molecules that have the same molecular formula and sequence of bonded atoms , but that differ only in the three-dimensional orientations of their atoms in space. This contrasts with structural isomers, which share the same molecular formula, but the bond connections...
in which the isomer
Isomer
In chemistry, isomers are compounds with the same molecular formula but different structural formulas. Isomers do not necessarily share similar properties, unless they also have the same functional groups. There are many different classes of isomers, like stereoisomers, enantiomers, geometrical...
s can be interconverted exclusively by rotations about formally single bonds. Such isomers are generally referred to as conformational isomers or conformers and specifically as rotamers when the rotation leading to different conformations is restricted (hindered) rotation,in the sense that there exists a rotational energy barrier that needs to be overcome to convert one conformer to another. Conformational isomers are thus distinct from the other classes of stereoisomers for which interconversion necessarily involves breaking and reforming of chemical bonds. The rotational barrier, or barrier to rotation, is the activation energy
Activation energy
In chemistry, activation energy is a term introduced in 1889 by the Swedish scientist Svante Arrhenius that is defined as the energy that must be overcome in order for a chemical reaction to occur. Activation energy may also be defined as the minimum energy required to start a chemical reaction...
required to interconvert rotamers.

Butane has three rotamers: two gauche conformers, which are enantiomer
Enantiomer
In chemistry, an enantiomer is one of two stereoisomers that are mirror images of each other that are non-superposable , much as one's left and right hands are the same except for opposite orientation. It can be clearly understood if you try to place your hands one over the other without...
ic and an anti conformer, where the four carbon centres are coplanar. The three eclipsed conformations with dihedral angle
Dihedral angle
In geometry, a dihedral or torsion angle is the angle between two planes.The dihedral angle of two planes can be seen by looking at the planes "edge on", i.e., along their line of intersection...
s of 0°,120° and 240° are not considered to be rotamers, but are instead transition states.

Some important examples of conformational isomerism include: 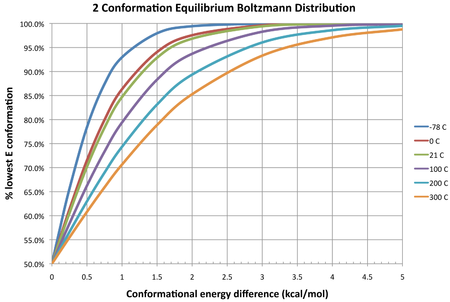 The left hand side is the equilibrium ratio of conformer i to the total.

is the relative energy of the i-th conformer from the minimum energy conformer.

is the relative energy of the k-th conformer from the minimum energy conformer. R is the molar ideal gas constant equal to 8.31 J/(mol·K) and T is the temperature in kelvin
Kelvin
The kelvin is a unit of measurement for temperature. It is one of the seven base units in the International System of Units and is assigned the unit symbol K. The Kelvin scale is an absolute, thermodynamic temperature scale using as its null point absolute zero, the temperature at which all...
s (K). The denominator of the right side is the partition function.


Isolation or observation of the conformational isomers


Techniques for study of conformational isomerism

Reaction rates are highly dependent on the conformation of the reactants. This theme is especially well elucidated in organic chemistry. One example is provided by the elimination reaction
Elimination reaction
An elimination reaction is a type of organic reaction in which two substituents are removed from a molecule in either a one or two-step mechanism...
s, which involve the simultaneous removal of a proton and a leaving group
Leaving group
In chemistry, a leaving group is a molecular fragment that departs with a pair of electrons in heterolytic bond cleavage. Leaving groups can be anions or neutral molecules. Common anionic leaving groups are halides such as Cl−, Br−, and I−, and sulfonate esters, such as para-toluenesulfonate...
from vicinal positions under the influence of a base. The mechanism requires that the departing atoms or groups follow antiparallel trajectories. For open chain substrates this geometric prerequisite is met by at least one of the three staggered conformers. For some cyclic substrates, however, an antiparallel arrangement may not be attainable depending. Adjacent substituent
Substituent
In organic chemistry and biochemistry, a substituent is an atom or group of atoms substituted in place of a hydrogen atom on the parent chain of a hydrocarbon...
s on a cyclohexane ring can achieve antiperiplanarity only when they occupy trans diaxial positions. One consequence of this analysis is that trans-4-tert-butylcyclohexyl chloride cannot easily eliminate but instead undergoes substitution.

Side-chain dihedral angles are not evenly distributed, but for most side chain types, the

angles occur in tight clusters around certain values. Rotamer libraries therefore are usually derived from statistical analysis of side-chain conformations in known structures of proteins by clustering observed conformations or by dividing dihedral angle space into bins, and determining an average conformation in each bin. This division is usually on physical-chemical grounds, as in the divisions for rotation about sp3-sp3 bonds into three 120° bins centered on each staggered conformation (60°, 180°, -60°).

Rotamer libraries can be backbone-independent, secondary-structure-dependent, or backbone-dependent. The distinctions are made depending on whether the dihedral angles for the rotamers and/or their frequencies depend on the local backbone conformation or not. Backbone-independent rotamer libraries make no reference to backbone conformation, and are calculated from all available side chains of a certain type. Secondary-structure-dependent libraries present different dihedral angles and/or rotamer frequencies for

, regardless of secondary structure. Finally, a variant on backbone-dependent rotamer libraries exists in the form of position-specific rotamers, those defined by a fragment usually of 5 amino acids in length, where the central residue’s side chain conformation is examined.