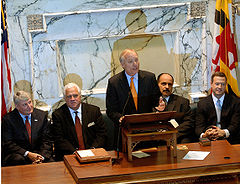 The Comptroller of Maryland, United States, currently Peter Franchot
Peter Franchot
Peter V. R. Franchot assumed office as the Comptroller of Maryland in January 2007. He was formerly a member of the Maryland House of Delegates, representing the 20th legislative district in Montgomery County, Maryland from 1987 to 2007.-Education and family:Franchot was born in New Haven,...
, is the state's chief financial officer
Chief financial officer
The chief financial officer or Chief financial and operating officer is a corporate officer primarily responsible for managing the financial risks of the corporation. This officer is also responsible for financial planning and record-keeping, as well as financial reporting to higher management...
and is also elected by the people for a four year term. The comptroller is not term-limited. The office was established by the Maryland Constitution of 1851
Maryland Constitution of 1851
The Maryland Constitution of 1851 was the second constitution of the U.S. state of Maryland following the revolution, replacing the Constitution of 1776. The primary reason for the new constitution was a need to re-apportion Maryland's legislature, the Maryland General Assembly...
due to concern about the potential for fraud and corruption in the administration of the public treasury. The constitutional duties of the office begin with the broad mandate to exercise "general superintendence of the fiscal affairs of the State", which includes collecting tax
Tax
To tax is to impose a financial charge or other levy upon a taxpayer by a state or the functional equivalent of a state such that failure to pay is punishable by law. Taxes are also imposed by many subnational entities...
es and maintaining the general ledger. The Comptroller (or a deputy) countersigns all checks drawn by the State Treasurer (who is elected by the General Assembly) upon the deposits of the State. The Comptroller also prescribes the formalities for transfer of other evidence of State debt
Debt
A debt is an obligation owed by one party to a second party, the creditor; usually this refers to assets granted by the creditor to the debtor, but the term can also be used metaphorically to cover moral obligations and other interactions not based on economic value.A debt is created when a...
and countersigns such papers.

In addition, the comptroller's office audits
Financial audit
A financial audit, or more accurately, an audit of financial statements, is the verification of the financial statements of a legal entity, with a view to express an audit opinion...
taxpayers for compliance, handles delinquent tax collection, and enforces license and unclaimed property laws. The agency publicizes forgotten bank accounts, insurance benefits and other unclaimed assets of taxpayers. Acting as Maryland's chief accountant, the comptroller pays the state's bills, maintains its books, prepares financial reports, and pays its state employees.