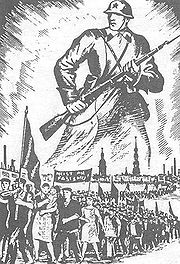 Communist Party of Latvia was a political party
Political party
A political party is a political organization that typically seeks to influence government policy, usually by nominating their own candidates and trying to seat them in political office. Parties participate in electoral campaigns, educational outreach or protest actions...
in Latvia
Latvia
Latvia , officially the Republic of Latvia , is a country in the Baltic region of Northern Europe. It is bordered to the north by Estonia , to the south by Lithuania , to the east by the Russian Federation , to the southeast by Belarus and shares maritime borders to the west with Sweden...
.


Latvian Social-Democracy prior to 1919

The party held its fourth congress in Brussels
Brussels
Brussels , officially the Brussels Region or Brussels-Capital Region , is the capital of Belgium and the de facto capital of the European Union...
January 26 to February 8, 1914.

In the aftermath of the Latvian War of Independence, the LKP was banned in Latvia. Its leadership resided in exile in the USSR, while the organisation in Latvia operated clandestinely, either through underground cells, or via proxy organisations, such as "Red" leftist trades unions.

In 1936, a youth organization parallel to the LKJS, Workers' Youth League of Latvia (LDJS), was formed as a cooperative effort by the LKP and their former rivals, the erstwhile Menshevik
Menshevik
The Mensheviks were a faction of the Russian revolutionary movement that emerged in 1904 after a dispute between Vladimir Lenin and Julius Martov, both members of the Russian Social-Democratic Labour Party. The dispute originated at the Second Congress of that party, ostensibly over minor issues...
Latvian Social Democratic Workers' Party
Latvian Social Democratic Workers' Party
The Latvian Social Democratic Workers' Party is a centre-left, social democratic party in Latvia. It has a long history but is not represented in the current parliament of Latvia.-History:...
, outlawed following the Ulmanis
Karlis Ulmanis
Kārlis Augusts Vilhelms Ulmanis was a prominent Latvian politician in pre-World War II Latvia during the Latvian period of independence from 1918 to 1940.- Education and early career :Ulmanis studied agriculture at the Swiss Federal Institute of Technology Zurich and...
coup d'état
Coup d'état
A coup d'état state, literally: strike/blow of state)—also known as a coup, putsch, and overthrow—is the sudden, extrajudicial deposition of a government, usually by a small group of the existing state establishment—typically the military—to replace the deposed government with another body; either...
in 1934.

After the entry of the Soviet Army
Soviet Army
The Soviet Army is the name given to the main part of the Armed Forces of the Soviet Union between 1946 and 1992. Previously, it had been known as the Red Army. Informally, Армия referred to all the MOD armed forces, except, in some cases, the Soviet Navy.This article covers the Soviet Ground...
to Latvia in June 1940 and the ousting of the Ulmanis government, the LKP and LDJS were legalised again and could operate openly.

On 14 April 1990, a pro-independence faction under Ivars Ķezbers split off from the LKP to form the Independent Communist Party of Latvia . The main body of the LKP, under the chairmanship of Alfrēds Rubiks
Alfreds Rubiks
Alfrēds Rubiks is a Latvian Socialist politician and a former leader of the Communist Party of Latvia. Currently he is the Member of the European Parliament from Latvia...
, remained loyal to Moscow and the CPSU leadership. Later that same year, on 14 September, Ķezbers's party was officially renamed the Democratic Labour Party of Latvia  and adopted nominally social-democratic platform.

Cīņa
CINA
CINA is a Canadian radio station, which broadcasts multicultural programming at AM 1650 in Mississauga, Ontario.Approved by the CRTC on April 23, 2007, the station is owned by Neeti Prakash Ray and began testing at 1650 kHz in late 2008....
(Struggle) was a newspaper founded in March 1904 as the Central Organ of the Latvian Social-Democrats. It was published periodically in Riga, Brussels and Petrograd. From 1919 it was the organ of the Communist Party of Latvia.

While the LKP leadership was in exile in the USSR during the interwar years and the Nazi occupation in World War II, Cīņa was published in the Russian SFSR. From 1940 onwards it was published in Riga.

In the Latvian SSR, Cīņa was one of the main Latvian-language dailies. In 1990, when the Ķezbers faction split from the main LKP to form the Independent Communists, they changed the name of the newspaper to Neatkarīgā Cīņa (The Independent Struggle), which after privatisation in the 1990s later became Neatkarīgā Rīta Avīze.

In the Latvian SSR, the LKP also published a monthly political journal Padomju Latvijas Komunists (Communist of Soviet Latvia, ; in the 1940s and '50s: Padomju Latvijas Boļševiks), with a parallel edition in Russian (Kommunist Sovetskoi Latvii). The journal ceased publication in 1990.


First Secretaries of the Communist Party of Latvia


Second Secretaries of the Communst Party of Latvia