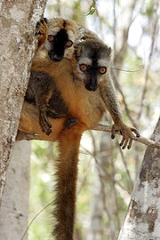 Encyclopedia
The common brown lemur (Eulemur fulvus), or brown lemur, is a species of lemur
Lemur
Lemurs are a clade of strepsirrhine primates endemic to the island of Madagascar. They are named after the lemures of Roman mythology due to the ghostly vocalizations, reflective eyes, and the nocturnal habits of some species...
in the Lemuridae
Lemuridae
Lemuridae is a family of prosimian primates native to Madagascar, and one of five families commonly known as lemurs. These animals were thought to be the evolutionary predecessors of monkeys and apes, but this is no longer considered correct...
family. It is found in Madagascar
Madagascar
The Republic of Madagascar is an island country located in the Indian Ocean off the southeastern coast of Africa...
and Mayotte
Mayotte
Mayotte is an overseas department and region of France consisting of a main island, Grande-Terre , a smaller island, Petite-Terre , and several islets around these two. The archipelago is located in the northern Mozambique Channel in the Indian Ocean, namely between northwestern Madagascar and...
.

The common brown lemur lives in western Madagascar north of the Betsiboka River
Betsiboka River
Betsiboka River is a long river in central-north Madagascar. It flows northwestward and empties to Bombetoka Bay, forming a large delta. The river is distinct for its red-coloured water, which is caused by river sediments. The river carries an enormous amount of reddish-orange silt to the sea...
and eastern Madagascar between the Mangoro River and Tsaratanana
Tsaratanana
Tsaratanana is a town and commune in Madagascar. It belongs to the district of Tsaratanana, which is a part of Betsiboka Region. The population of the commune was estimated to be approximately 18,000 in 2001 commune census....
, as well as in inland Madagascar connecting the eastern and western ranges. They also live on the island of Mayotte, although this population is believed to have been introduced
Introduced species
An introduced species — or neozoon, alien, exotic, non-indigenous, or non-native species, or simply an introduction, is a species living outside its indigenous or native distributional range, and has arrived in an ecosystem or plant community by human activity, either deliberate or accidental...
there by man.

The common brown lemur has a total length of 84 to 101 centimeters, including 41 to 51 centimeters of tail. Weight ranges from 2 to 3 kilograms. The short, dense fur
Fur
Fur is a synonym for hair, used more in reference to non-human animals, usually mammals; particularly those with extensives body hair coverage. The term is sometimes used to refer to the body hair of an animal as a complete coat, also known as the "pelage". Fur is also used to refer to animal...
is primarily brown or grey-brown. The face, muzzle and crown are dark grey or black with paler eyebrow patches, and the eyes are orange-red.

Similar lemur species within their range include the mongoose lemur
Mongoose Lemur
The mongoose lemur is a lemur ranging from 12 to 18 inches long plus a tail of 16 to 25 inches. The mongoose lemur lives in dry deciduous forests on the island of Madagascar as well as in the humid forests on the islands of the Comoros...
, E. mongoz, in the west and the red-bellied lemur
Red-bellied Lemur
The Red-bellied Lemur is a medium sized prosimian with a luxuriant chestnut brown coat. This lemur is endemic to eastern Madagascan rainforests and is distinguished by patches of white skin below the eyes, giving rise to a "teardrop" effect, particularly conspicuous in the male.The species, first...
, E. rubriventer, in the east. They can be distinguished from these species by the fact that E. mongoz is more of a grey color and E. rubriventer is more reddish. There is also some overlap with the black lemur
Black Lemur
The Black Lemur is a species of lemur from the family Lemuridae. Like all lemurs, it is endemic to Madagascar. Originally, the species was thought to have two subspecies, Eulemur macaco macaco and Eulemur macaco flavifrons, both of which were elevated to species status by Mittermeier et al. in...
in northeast Madagascar in the Galoko, Manongarivo and Tsaratanana Massifs. There is also overlap and hybridization with the white-fronted brown lemur, E. albifrons, in the northeast portion of the common brown lemur's range.

The common brown lemur's diet consists primarily of fruits, young leaves, and flowers. In some locations it eats invertebrates, such as cicada
Cicada
A cicada is an insect of the order Hemiptera, suborder Auchenorrhyncha , in the superfamily Cicadoidea, with large eyes wide apart on the head and usually transparent, well-veined wings. There are about 2,500 species of cicada around the world, and many of them remain unclassified...
s, spider
Spider
Spiders are air-breathing arthropods that have eight legs, and chelicerae with fangs that inject venom. They are the largest order of arachnids and rank seventh in total species diversity among all other groups of organisms...
s and millipede
Millipede
Millipedes are arthropods that have two pairs of legs per segment . Each segment that has two pairs of legs is a result of two single segments fused together as one...
s. It also eats bark, sap, soil and red clay (see geophagy
Geophagy
Geophagy is the practice of eating earthy or soil-like substances such as clay, and chalk. It exists in animals in the wild and also in humans, most often in rural or preindustrial societies among children and pregnant women...
). It can tolerate greater levels of toxic compounds from plants than other prosimian
Prosimian
Prosimians are a grouping of mammals defined as being primates, but not monkeys or apes. They include, among others, lemurs, bushbabies, and tarsiers. They are considered to have characteristics that are more primitive than those of monkeys and apes. Prosimians are the only primates native to...
s can.

Consistent with its large range, the common brown lemur occupies a variety of forest types, including lowland rainforest
Rainforest
Rainforests are forests characterized by high rainfall, with definitions based on a minimum normal annual rainfall of 1750-2000 mm...
s, montane
Montane
In biogeography, montane is the highland area located below the subalpine zone. Montane regions generally have cooler temperatures and often have higher rainfall than the adjacent lowland regions, and are frequently home to distinct communities of plants and animals.The term "montane" means "of the...
rainforests, moist evergreen forest
Evergreen forest
An temperate evergreen forest is a forest consisting entirely or mainly of evergreen trees that retain green foliage all year round. Such forests exist in the tropics primarily as broadleaf evergreens, and in temperate and boreal latitudes primarily as coniferous evergreens.-Tropical evergreen...
s and dry deciduous forests. They spend about 95% of their time in upper layers of the forest and less than 2% of their time on the ground.

They normally live in groups of 5 to 12, but group size can be larger, especially on Mayotte. Groups occupy home ranges of 1 to 9 hectare
Hectare
The hectare is a metric unit of area defined as 10,000 square metres , and primarily used in the measurement of land. In 1795, when the metric system was introduced, the are was defined as being 100 square metres and the hectare was thus 100 ares or 1/100 km2...
s in the west, but more than 20 hectares in the east. Groups include members of both sexes, including juveniles, and there are no discernible dominance hierarchies.

They are primarily active during the day, but can exhibit cathemeral
Cathemeral
A cathemeral organism is one that has sporadic and random intervals of activity during the day or night in which food is acquired, socializing with other organisms occurs, and any other activities necessary for livelihood are performed...
activity and continue into the night, especially during full moons and during the dry season.

In the western part of its range, the common brown lemur overlaps that of the mongoose lemur
Mongoose Lemur
The mongoose lemur is a lemur ranging from 12 to 18 inches long plus a tail of 16 to 25 inches. The mongoose lemur lives in dry deciduous forests on the island of Madagascar as well as in the humid forests on the islands of the Comoros...
, and the two species sometimes travel together. In the areas of overlap, the two species also adapt their activity patterns to avoid conflict. For example, the Mongoose Lemur can become primarily nocturnal during the dry season in the areas of overlap.

At Berenty (south Madagascar) there is a population of introduced E. fulvus rufus x collaris. These lemurs show linear hierarchy, adult female dominance, and the presence of conciliatory behavior after aggressions. Additionally, stress levels (measured via self-directed behaviors) decrease at the increase of the hierarchical position of individuals within the social group and reconciliation is able to bring stress down to the baseline levels.

The common brown lemur's mating season is May and June. After a gestation period
Gestation
Gestation is the carrying of an embryo or fetus inside a female viviparous animal. Mammals during pregnancy can have one or more gestations at the same time ....
of about 120 days, the young are born in September and October. Single births are most common, but twins have been reported. The young are weaned after about 4 to 5 months. Sexual maturity occurs at about 18 months, and females give birth to their first young at 2 years old. Life span can be as long as 30+ years.

Five additional currently recognized species of lemur were until 2001 considered subspecies of E. fulvus. These are:


However, a number of zoologists believe that E. albifrons and E. rufus should continue to be considered subspecies of E. fulvus.
The source of this article is wikipedia, the free encyclopedia.  The text of this article is licensed under the GFDL.