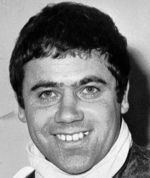 Colin Pratt in Hoddesdon
Hoddesdon
Hoddesdon is a town in the English county of Hertfordshire, situated in the Lea Valley. The town grew up as a coaching stop on the route between Cambridge and London. It is located southeast of Hertford, north of Waltham Cross and southwest of Bishop's Stortford. At its height during the 18th...
, Hertfordshire
Hertfordshire
Hertfordshire is a ceremonial and non-metropolitan county in the East region of England. The county town is Hertford.The county is one of the Home Counties and lies inland, bordered by Greater London , Buckinghamshire , Bedfordshire , Cambridgeshire and...
) is a former motorcycle speedway
Motorcycle speedway
Motorcycle speedway, usually referred to as speedway, is a motorcycle sport involving four and sometimes up to six riders competing over four anti-clockwise laps of an oval circuit. Speedway motorcycles use only one gear and have no brakes and racing takes place on a flat oval track usually...
rider and current promoter of the Coventry Bees who compete in the British Elite League
Speedway Elite League
The Elite League is the top division of Speedway league competition in the United Kingdom and is governed by the Speedway Control Bureau , in conjunction with the British Speedway Promoters' Association . It is sponsored by Sky Sports...
.

Pratt became co-promoter at the Rye House Rockets
Rye House Rockets
The Rye House Rockets are a Speedway team based at Rye House Stadium, Hoddesdon, England. They currently compete in the British Premier League.The club is promoted by Len Silver who previously ran the Hackney Hawks promotion at Hackney Wick Stadium....
with former boss Len Silver
Len Silver
Len Silver is a former speedway rider and is currently promoter of the Rye House Rockets.-Racing career:Silver stopped racing in 1957 but returned to the Ipswich Witches in 1960 after a layoff due to injury...
in 1979. In 1983, he spent a season as team manager at King's Lynn Stars
King's Lynn Stars
King's Lynn Stars are a motorcycle speedway team who compete in the British Elite League. The nickname "Stars" comes from the defunct Norwich Stars team...
before becoming promoter at Cradley Heath
Cradley Heath Heathens
Cradley Heath Heathens are a defunct motorcycle speedway team from Dudley, England.-History:Cradley Heath speedway team was formed in 1947 and first raced at Dudley Wood Stadium on 21 June 1947 after a number of away appearances prior to the opening of the newly built stadium...
in 1984. He stayed at Cradley until 1996 where he became co-promoter of the ill-fated London Lions
London Lions (speedway)
The London Lions were a motorcycle speedway team that operated for one season in 1996 from the Hackney Wick Stadium, the former home of the Hackney Hawks and the Hackney Kestrels..-Management:...
, based at the Hawks' previous stadium, Hackney Wick. By now it had been redeveloped and renamed the London Stadium.

The promotion closed after one season so Pratt moved to the Bradford Dukes
Bradford Dukes
The Bradford Dukes were a British motorcycle speedway team which operated from the Odsal Stadium in Bradford from 1986 until their closure in 1997.-History:...
as team manager. In 1998, the opportunity arose to join the Coventry Bees
Coventry Bees
The Coventry Bees are a motorcycle speedway team based at Brandon near Coventry, England. A Coventry team was first formed in 1928 and competed in the Southern League and then the National League in the pre-war era at Brandon stadium. There were also meetings at a stadium in Lythalls Lane...
as promoter and Pratt has been there ever since.