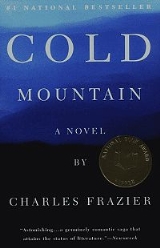 Does Reid (the Georgian boy) become Ada's husband or Ruby's husband? It was just unclear.
More

How does Frazier use stars?
More

The novel opens in a Confederate military hospital where the protagonist, Inman, is recovering from a recent battle wound. Tired of fighting for a cause he never believed in and longing for his home at Cold Mountain, North Carolina, he decides to desert from the Confederate Army and sets out on an epic journey home.

The narrative alternates between the story of Inman and that of Ada Monroe, a minister's daughter recently relocated from Charleston to the rural mountain community of Cold Mountain. Though they only knew each other for a brief time before Inman departed for the war, it is largely the hope of seeing Ada again that drives Inman to desert the army and make the dangerous journey back to Cold Mountain. Details of their brief history together are told at intervals in flashback over the course of the novel.

At Cold Mountain, Ada's father soon dies and the farm where the genteel city-bred Ada lives, named Black Cove, is soon reduced to a state of disrepair. A young woman named Ruby, outspoken and resourceful, soon moves in and begins to help Ada to overcome her circumstances and the two of them form a close friendship as they attempt to survive in this harsh war-torn environment.

Inman's journey to return to Ada is perilous. He faces starvation, extreme weather, the constant harassment of the Home Guard sent to track down deserters, and the treachery of other desperate individuals. He is at times aided in his journey by strangers equally affected by the horrors of war. Frazier's narrative depicts a bleak landscape of America during the Civil War focusing on the emotional and psychological scars left upon combatants and citizens alike.

It was later adapted for the screen by director Anthony Minghella
Anthony Minghella
Anthony Minghella, CBE was an English film director, playwright and screenwriter. He was Chairman of the Board of Governors at the British Film Institute between 2003 and 2007....
in the 2003 film Cold Mountain
Cold Mountain (film)
Cold Mountain is a 2003 war drama film written and directed by Anthony Minghella. The film is based on the bestselling novel of the same name by Charles Frazier...
, starring Jude Law
Jude Law
David Jude Heyworth Law , known professionally as Jude Law, is an English actor, film producer and director.He began acting with the National Youth Music Theatre in 1987, and had his first television role in 1989...
, Nicole Kidman
Nicole Kidman
Nicole Mary Kidman, AC is an American-born Australian actress, singer, film producer, spokesmodel, and humanitarian. After starring in a number of small Australian films and TV shows, Kidman's breakthrough was in the 1989 thriller Dead Calm...
, and Renée Zellweger
Renée Zellweger
Renée Kathleen Zellweger is an American actress and producer. Zellweger first gained widespread attention for her role in the film Jerry Maguire , and subsequently received two nominations for the Academy Award for Best Actress for her roles as Bridget Jones in the comedy Bridget Jones's Diary ...
. The film was nominated for seven Academy Awards
Academy Awards
An Academy Award, also known as an Oscar, is an accolade bestowed by the American Academy of Motion Picture Arts and Sciences to recognize excellence of professionals in the film industry, including directors, actors, and writers...
, including Best Actor for Jude Law, and won the Oscar for Best Supporting Actress for Renée Zellweger.
The source of this article is wikipedia, the free encyclopedia.  The text of this article is licensed under the GFDL.