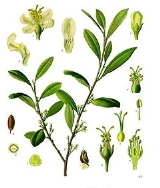 Overview
Coca, Erythroxylum coca, is a plant in the family
Family (biology)
In biological classification, family is* a taxonomic rank. Other well-known ranks are life, domain, kingdom, phylum, class, order, genus, and species, with family fitting between order and genus. As for the other well-known ranks, there is the option of an immediately lower rank, indicated by the...
Erythroxylaceae
Erythroxylaceae
The Erythroxylaceae is a family of flowering plants consisting of 4 genera and approximately 240 species. The best-known species is the coca plant , the source of the drug cocaine....
, native to western South America. The plant plays a significant role in many traditional Andean culture
Andean culture
Andean culture is a collective term used to refer to the indigenous cultures of the Andes mountains especially those that came under the influence of the Inca empire...
s (see the Traditional uses section). Coca is best known throughout the world because of its alkaloid
Alkaloid
Alkaloids are a group of naturally occurring chemical compounds that contain mostly basic nitrogen atoms. This group also includes some related compounds with neutral and even weakly acidic properties. Also some synthetic compounds of similar structure are attributed to alkaloids...
s, which include cocaine
Cocaine
Cocaine is a crystalline tropane alkaloid that is obtained from the leaves of the coca plant. The name comes from "coca" in addition to the alkaloid suffix -ine, forming cocaine. It is a stimulant of the central nervous system, an appetite suppressant, and a topical anesthetic...
, a powerful stimulant
Stimulant
Stimulants are psychoactive drugs which induce temporary improvements in either mental or physical function or both. Examples of these kinds of effects may include enhanced alertness, wakefulness, and locomotion, among others...
.
The Erythroxylum coca plant resembles a blackthorn bush
Blackthorn
Prunus spinosa is a species of Prunus native to Europe, western Asia, and locally in northwest Africa. It is also locally naturalised in New Zealand and eastern North America....
, and grows to a height of 2–3 m (7–10 ft). The branches are straight, and the leaves, which have a green tint, are thin, opaque, oval, and taper at the extremities.

How do the study of cocoa plants relate to environmental challenges?
More
x