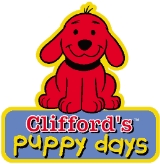 Encyclopedia
Clifford's Puppy Days is an animated television series on PBS Kids
PBS Kids
PBS Kids is the brand for children's programming aired by the Public Broadcasting Service in the United States founded in 1993. As with all PBS programming, PBS Kids programming is non-commercial. It is aimed at children ages 2 to 10...
. It is a spin-off of the Clifford the Big Red Dog TV series, and it features Clifford the Big Red Dog
Clifford the Big Red Dog
Clifford the Big Red Dog is an American children's book series first published in 1963. Written by Norman Bridwell, the series helped establish Scholastic Books as a premier publishing company....
, a popular cartoon character. It is set when Clifford was a puppy. Other characters are Clifford's friends, Norville (a bird
Bird
Birds are feathered, winged, bipedal, endothermic , egg-laying, vertebrate animals. Around 10,000 living species and 188 families makes them the most speciose class of tetrapod vertebrates. They inhabit ecosystems across the globe, from the Arctic to the Antarctic. Extant birds range in size from...
), Jorge (a dachshund
Dachshund
The dachshund is a short-legged, long-bodied dog breed belonging to the hound family. The standard size dachshund was bred to scent, chase, and flush out badgers and other burrow-dwelling animals, while the miniature dachshund was developed to hunt smaller prey such as rabbits...
), Flo and Zo (two cat
Cat
The cat , also known as the domestic cat or housecat to distinguish it from other felids and felines, is a small, usually furry, domesticated, carnivorous mammal that is valued by humans for its companionship and for its ability to hunt vermin and household pests...
s), and Daffodil (a rabbit
Rabbit
Rabbits are small mammals in the family Leporidae of the order Lagomorpha, found in several parts of the world...
).

The series focuses on when Clifford is a tiny red puppy, the runt of the litter in a litter of puppies given birth to by the pet dog of Emily Elizabeth's neighbor, Mr. Bradley (who appeared in an episode of the first cartoon series, "Little Clifford"), and after he had been adopted by Emily Elizabeth and before he grew up into a giant red adult dog, forcing the Howards to move to Birdwell Island so Clifford would have plenty of room, so the series shows Clifford and Emily Elizabeth's life and friends before they moved from the city to Birdwell Island and all of their adventures.

The show followed the same format as its predecessor, Clifford the Big Red Dog.

In Britain, where the show was only 15 minutes long, the format consists of the central story, followed by Clifford's Idea to Grow On or Speckle Story.


They are owned by Mr. Solomon. In the episodes "The Big, Big Present/Hanukkah Plunder Blunder," it is revealed that they and Mr. Solomon are Jewish.

The show was ultimately short-lived, and hasn't aired ever since final reruns have aired in 2006. However, PBS aired the Halloween episode of Clifford's Puppy Days during October 2011; this serves as the show's final airing ever.

The opening theme, "Love Makes Little Things Grow", was composed by Jared Faber
Jared Faber
Jared Faber is an American musician, composer, producer and multi instrumentalist from Colombian descent. He grew up in New York City where he attended High School of Performing Arts, and later continued his music education at Berklee College of Music, studying jazz arranging and...
& Emily Kapnek
Emily Kapnek
Emily Kapnek is an actress, television producer and three time Emmy Award nominated writer. She created the animated program As Told by Ginger and executive produced the short-lived television series Emily's Reasons Why Not...
and performed by Freedom Bremner, a native of Washington, D.C.
Washington, D.C.
Washington, D.C., formally the District of Columbia and commonly referred to as Washington, "the District", or simply D.C., is the capital of the United States. On July 16, 1790, the United States Congress approved the creation of a permanent national capital as permitted by the U.S. Constitution....
(See credits).
The source of this article is wikipedia, the free encyclopedia.  The text of this article is licensed under the GFDL.