Encyclopedia
Clathrin is a protein
Protein
Proteins are biochemical compounds consisting of one or more polypeptides typically folded into a globular or fibrous form, facilitating a biological function. A polypeptide is a single linear polymer chain of amino acids bonded together by peptide bonds between the carboxyl and amino groups of...
that plays a major role in the formation of coated vesicles
Vesicle (biology)
A vesicle is a bubble of liquid within another liquid, a supramolecular assembly made up of many different molecules. More technically, a vesicle is a small membrane-enclosed sack that can store or transport substances. Vesicles can form naturally because of the properties of lipid membranes , or...
. Clathrin was first isolated and named by Barbara Pearse
Barbara Pearse
Barbara Pearse is a British biological scientist and Fellow of the Royal Society. She works at the Medical Research Council Laboratory of Molecular Biology in Cambridge, United Kingdom....
in 1975. It forms a triskelion
Triskelion
A triskelion or triskele is a motif consisting of three interlocked spirals, or three bent human legs, or any similar symbol with three protrusions and a threefold rotational symmetry. Both words are from Greek or , "three-legged", from prefix "τρι-" , "three times" + "σκέλος" , "leg"...
shape composed of three clathrin heavy chains and three light chains. When the triskelia interact they form a polyhedral
Dihedral group
In mathematics, a dihedral group is the group of symmetries of a regular polygon, including both rotations and reflections. Dihedral groups are among the simplest examples of finite groups, and they play an important role in group theory, geometry, and chemistry.See also: Dihedral symmetry in three...
lattice that surrounds the vesicle. Coat-proteins, like clathrin, are used to build small vesicles in order to safely transport molecules between cells. The endocytosis and exocytosis of vesicles allows cells to transfer nutrients, to import signaling receptors, to mediate an immune response after sampling the extracellular world, and to clean up the cell debris left by tissue inflammation. On occasion, this mechanism also provides a pathway for raiding pathogens or toxins.

The clathrin triskelion is composed of three clathrin heavy chains and three light chains interacting at their C-termini. The three heavy chains provide the structural backbone of the clathrin lattice, and the three light chains are thought to regulate the formation and disassembly of a clathrin lattice. Clathrin heavy chain is, in concept, broken down into multiple subdomains, starting with the N-terminal domain, followed by the ankle, distal leg, knee, proximal leg, and trimerization domains. The N-terminal domain consists of a seven-bladed β-propeller structure. The other domains form a super-helix of short alpha helices. This was originally determined from the structure of the proximal leg domain that identified and is composed of a smaller structural module referred to as clathrin heavy chain repeat motifs. The light chains bind primarily to the proximal leg portion of the heavy chain with some interaction near the trimerization domain. When triskelia assemble together in solution, they can interact with enough flexibility to form 6-sided rings that yield a flatter lattice, or 5-sided rings that are necessary for curved lattice formation. When many triskelions connect, they can form a basket-like structure.

The structure shown above, is built of 36 triskelia, one of which is highlighted in green. When triskelia snap together in solution, they can interact with enough flexibility to form either 6-sided rings that yield a flatter surface or 5-sided rings with higher curvature. In a cell, a triskelion floating in the cytoplasm binds to an adaptor protein (shown on the next page), linking one of its three feet to the membrane at a time. This triskelion will bind to other membrane-attached triskelia to form a rounded lattice of hexagons and pentagons, reminiscent of the panels on a soccer ball, that pulls the membrane into a bud. By constructing different combinations of 5-sided and 6-sided rings, vesicles of different sizes may assemble. The structure shown here represents the second-smallest possible cage structure, which is actually too small to contain a functional vesicle. It was created in the laboratory by reconstituting triskelions without a lipid vesicle. The smallest clathrin cage commonly photographed, called a mini-coat, has 12 pentagons and only two hexagons. Even smaller cages with zero hexagons probably do not form from the native protein, because the feet of the triskelia are too bulky. 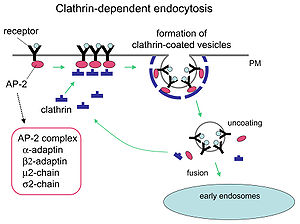 Like many proteins, clathrin represents a perfect case of form following function; it performs critical roles in shaping rounded vesicles in the cytoplasm
Cytoplasm
The cytoplasm is a small gel-like substance residing between the cell membrane holding all the cell's internal sub-structures , except for the nucleus. All the contents of the cells of prokaryote organisms are contained within the cytoplasm...
for intracellular trafficking. Clathrin-coated vesicles (CCV) selectively sort cargo at the cell membrane
Cell membrane
The cell membrane or plasma membrane is a biological membrane that separates the interior of all cells from the outside environment. The cell membrane is selectively permeable to ions and organic molecules and controls the movement of substances in and out of cells. It basically protects the cell...
, trans-Golgi network
Golgi apparatus
The Golgi apparatus is an organelle found in most eukaryotic cells. It was identified in 1898 by the Italian physician Camillo Golgi, after whom the Golgi apparatus is named....
, and endosomal
Endosome
In biology, an endosome is a membrane-bound compartment inside eukaryotic cells. It is a compartment of the endocytic membrane transport pathway from the plasma membrane to the lysosome. Molecules internalized from the plasma membrane can follow this pathway all the way to lysosomes for...
compartments for multiple membrane traffic pathways. After a vesicle buds into the cytoplasm, the coat rapidly disassembles, allowing the clathrin to recycle while the vesicle gets transported to a variety of locations. Adaptor molecules are responsible for self-assembly and recruitment. Two examples of adaptor protein
Adaptor protein
Signal transducing adaptor proteins are proteins which are accessory to main proteins in a signal transduction pathway. These proteins tend to lack any intrinsic enzymatic activity themselves but instead mediate specific protein–protein interactions that drive the formation of protein complexes...
s are AP180
Ap180
AP180 is a protein that plays an important role in clathrin-mediated endocytosis of synaptic vesicles. It is capable of simultaneously binding both membrane lipids and clathrin and is therefore thought to recruit clathrin to the membrane of newly invaginating vesicles...
and epsin
Epsin
Epsins are the family of membrane proteins that are important in creating the needed membrane curvature. Epsins contribute to various needed membrane deformations like endocytosis and block vesicle formation during mitosis. Epsins have many different domains to interact with various proteins...
. AP180 is used in synaptic vesicle formation. It recruits clathrin to membranes and also promotes its polymerization
Polymerization
In polymer chemistry, polymerization is a process of reacting monomer molecules together in a chemical reaction to form three-dimensional networks or polymer chains...
. Epsin also recruits clathrin to membranes and promotes its polymerization, and can help deform the membrane, and thus clathrin-coated vesicles can bud. In a cell, a triskelion floating in the cytoplasm binds to an adaptor protein, linking one of its feet to the membrane at a time. The skelion will bind to other ones attached to the membrane to form a polyhedral lattice, skelion, which pulls the membrane into a bud. The skelion does not bind directly to the membrane, but binds to the adaptor proteins that recognize the molecules on the membrane surface.

Clathrin has another function aside from the coating of organelle
Organelle
In cell biology, an organelle is a specialized subunit within a cell that has a specific function, and is usually separately enclosed within its own lipid bilayer....
s. In non-dividing cells, the formation of clathrin-coated vesicles occurs continuously. Formation of clathrin-coated vesicles is shut down in cells undergoing mitosis
Mitosis
Mitosis is the process by which a eukaryotic cell separates the chromosomes in its cell nucleus into two identical sets, in two separate nuclei. It is generally followed immediately by cytokinesis, which divides the nuclei, cytoplasm, organelles and cell membrane into two cells containing roughly...
. During mitosis, clathrin binds to the spindle apparatus. Clathrin aids in the congression of chromosomes by stabilizing fibres of the mitotic spindle
Mitotic spindle
In cell biology, the spindle fibers are the structure that separates the chromosomes into the daughter cells during cell division. It is part of the cytoskeleton in eukaryotic cells...
. Clathrin is bound directly through the amino-terminal domain of the clathrin heavy chain. During mitosis the clathrin binds directly to the microtubule
Microtubule
Microtubules are a component of the cytoskeleton. These rope-like polymers of tubulin can grow as long as 25 micrometers and are highly dynamic. The outer diameter of microtubule is about 25 nm. Microtubules are important for maintaining cell structure, providing platforms for intracellular...
s or microtubule-associated proteins. The stabilization of kinetochore
Kinetochore
The kinetochore is the protein structure on chromatids where the spindle fibers attach during cell division to pull sister chromatids apart....
fibres requires the trimetric structure of clathrin in order to strengthen the spindle fibres.

Clathrin-mediated endocytosis (CME) regulates many cellular physiological processes such as the internalization of growth factors and receptors, entry of pathogens, and synaptic transmission. It is believed that cellular invaders use the nutrient pathway to gain access to a cell's replicating mechanisms. Certain signalling molecules open the nutrients pathway. Two chemical compounds called Pitstop 1 and Pitstop 2, selective clathrin inhibitors, can interfere with the pathogenic activity, and thus protect the cells against invasion. These two compounds selectively block the endocytic ligand association with the clathrin terminal domain.