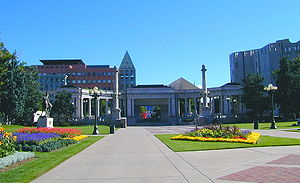 A civic center or civic centre (see "American and British English spelling differences
American and British English spelling differences
One of the ways in which American English and British English differ is in spelling.-Historical origins:In the early 18th century, English spelling was not standardized. Differences became noticeable after the publishing of influential dictionaries...
") is a prominent land
Earth
Earth is the third planet from the Sun, and the densest and fifth-largest of the eight planets in the Solar System. It is also the largest of the Solar System's four terrestrial planets...
area within a community
Community
The term community has two distinct meanings:*a group of interacting people, possibly living in close proximity, and often refers to a group that shares some common values, and is attributed with social cohesion within a shared geographical location, generally in social units larger than a household...
that is constructed to be its focal point or center. It usually contains one or more dominant public buildings
Infrastructure
Infrastructure is basic physical and organizational structures needed for the operation of a society or enterprise, or the services and facilities necessary for an economy to function...
, which may also include a government building. Recently, the term "civic center" has been used in reference to an entire central business district
Central business district
A central business district is the commercial and often geographic heart of a city. In North America this part of a city is commonly referred to as "downtown" or "city center"...
of a community or a major shopping center in the middle of a community. In this type of civic center, special attention is paid to the way public structures are grouped and landscaped.


Civic centers in the UK

In most cases civic centers in the UK
United Kingdom
The United Kingdom of Great Britain and Northern IrelandIn the United Kingdom and Dependencies, other languages have been officially recognised as legitimate autochthonous languages under the European Charter for Regional or Minority Languages...
are a focus for local government offices and public service buildings. The Cardiff Civic Centre
Cathays Park
In addition to the large lawn in front of the City Hall, Cathays Park includes three formal gardens. All of the spaces are within conservation areas and many of the surrounding buildings are listed. The open spaces are very important to the image of the city. Several important buildings overlook...
is probably the oldest and best preserved civic centers in the UK. With reforms of local government in London in 1965 and across England in anticipation of the implementation of the Redcliffe-Maud Report
Redcliffe-Maud Report
The Redcliffe–Maud Report is the name generally given to the report published by the Royal Commission on Local Government in England 1966–1969 under the chairmanship of Lord Redcliffe-Maud.-Terms of reference and membership:...
in 1974, a number of local authorities commissioned new civic centers sometimes funded by disposing of their 19th Century Town Hall buildings. Sir Basil Spence
Basil Spence
Sir Basil Urwin Spence, OM, OBE, RA was a Scottish architect, most notably associated with Coventry Cathedral in England and the Beehive in New Zealand, but also responsible for numerous other buildings in the Modernist/Brutalist style.-Training:Spence was born in Bombay, India, the son of Urwin...
was responsible for designing three of these civic centers: