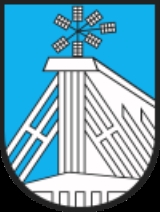 Ciechocinek ć is a spa town
Spa town
A spa town is a town situated around a mineral spa . Patrons resorted to spas to "take the waters" for their purported health benefits. The word comes from the Belgian town Spa. In continental Europe a spa was known as a ville d'eau...
in Kuyavian-Pomeranian Voivodeship
Kuyavian-Pomeranian Voivodeship
-Transportation:Transportation infrastructure is of critical importance to the voivodeship's economy. Kuyavia-Pomerania is a major node point in the Polish transportation system. Railway lines from the South and East pass through Bydgoszcz in order to reach the major ports on the Baltic Sea...
, Poland
Poland
Poland , officially the Republic of Poland , is a country in Central Europe bordered by Germany to the west; the Czech Republic and Slovakia to the south; Ukraine, Belarus and Lithuania to the east; and the Baltic Sea and Kaliningrad Oblast, a Russian exclave, to the north...
, located on the Vistula River about 10 kilometres (6.2 mi) east of Aleksandrów Kujawski
Aleksandrów Kujawski
Aleksandrów Kujawski is a small town in Poland, in Kuyavian-Pomeranian Voivodeship.It is situated about 18 km south-east of Toruń...
and 20 kilometres (12.4 mi) south-east of the city of Toruń
Torun
Toruń is an ancient city in northern Poland, on the Vistula River. Its population is more than 205,934 as of June 2009. Toruń is one of the oldest cities in Poland. The medieval old town of Toruń is the birthplace of the astronomer Nicolaus Copernicus....
.

Ciechocinek is known for its unique 'saline graduation tower
Graduation tower
A graduation tower is a structure used in the production of salt which removes water from a saline solution by evaporation, increasing its concentration of mineral salts. The tower consists of a wooden wall-like frame stuffed with bundles of brushwood which have to be changed about every 5 to 10...
s'.
Experts have considered the local saline springs to be of extreme value and named the thermal spring no. 14 "a wonder of nature". The therapeutic qualities of these springs are directed toward curing cardiovascular, respiratory, orthopedic, traumatic, rheumatic, nervous system and women's diseases.

Following the invasion of Poland at the beginning of the Second World War, Ciechocinek was occupied by Nazi Germany
Nazi Germany
Nazi Germany , also known as the Third Reich , but officially called German Reich from 1933 to 1943 and Greater German Reich from 26 June 1943 onward, is the name commonly used to refer to the state of Germany from 1933 to 1945, when it was a totalitarian dictatorship ruled by...
and incorporated into the Reichsgau Wartheland
Reichsgau Wartheland
Reichsgau Wartheland was a Nazi German Reichsgau formed from Polish territory annexed in 1939. It comprised the Greater Poland and adjacent areas, and only in part matched the area of the similarly named pre-Versailles Prussian province of Posen...
as part of the district/county (kreis) of Hermannsbad. During the war the town functioned as a military hospital and also as a health resort for German citizens.