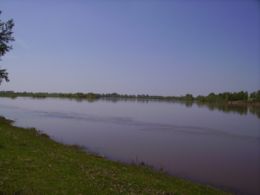 The Chulym is a river
River
A river is a natural watercourse, usually freshwater, flowing towards an ocean, a lake, a sea, or another river. In a few cases, a river simply flows into the ground or dries up completely before reaching another body of water. Small rivers may also be called by several other names, including...
in Krasnoyarsk Krai
Krasnoyarsk Krai
Krasnoyarsk Krai is a federal subject of Russia . It is the second largest federal subject after the Sakha Republic, and Russia's largest krai, occupying an area of , which is 13% of the country's total territory. The administrative center of the krai is the city of Krasnoyarsk...
and Tomsk Oblast
Tomsk Oblast
Tomsk Oblast is a federal subject of Russia . It lies in the southeastern West Siberian Plain, in the southwest of the Siberian Federal District. Its administrative center is the city of Tomsk. Population:...
in Russia
Russia
Russia or , officially known as both Russia and the Russian Federation , is a country in northern Eurasia. It is a federal semi-presidential republic, comprising 83 federal subjects...
, a right tributary
Tributary
A tributary or affluent is a stream or river that flows into a main stem river or a lake. A tributary does not flow directly into a sea or ocean...
of the Ob River
Ob River
The Ob River , also Obi, is a major river in western Siberia, Russia and is the world's seventh longest river. It is the westernmost of the three great Siberian rivers that flow into the Arctic Ocean .The Gulf of Ob is the world's longest estuary.-Names:The Ob is known to the Khanty people as the...
. The length of the river is 1799 kilometres (1,117.8 mi). The area of its basin
Drainage basin
A drainage basin is an extent or an area of land where surface water from rain and melting snow or ice converges to a single point, usually the exit of the basin, where the waters join another waterbody, such as a river, lake, reservoir, estuary, wetland, sea, or ocean...
is 134000 square kilometres (51,737.7 sq mi). The Chulym flows into the Ob in Ust-Chulym. The towns of Nazarovo
Nazarovo, Krasnoyarsk Krai
Nazarovo is a town in Krasnoyarsk Krai, Russia, located on the left bank of the Chulym River , west of Krasnoyarsk. It serves as the administrative center of Nazarovsky District, although it is not administratively a part of it. Population:...
, Achinsk
Achinsk
Achinsk is a city in Krasnoyarsk Krai, Russia, located on the right bank of the Chulym River near its intersection with the Trans-Siberian Railway, west of Krasnoyarsk. Area: . Population:...
, and Asino
Asino
Asino is a town and the administrative center of Asinovsky District of Tomsk Oblast, Russia. Population: -History:It was founded in 1896 as Kseniyevsky transmigratory settlement; in 1930 the construction of the railway Tomsk–Kseniyevskoye started...
are located on the Chulym River.

The Swedish explorer Johann Peter Falck noted 18th century hunter gatherers living along the banks of the Chulym River.
The source of this article is wikipedia, the free encyclopedia.  The text of this article is licensed under the GFDL.