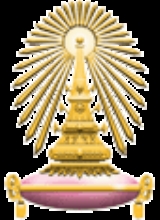 Overview
Chulalongkorn University (commonly abbreviated as "Chula") is the oldest university
University
A university is an institution of higher education and research, which grants academic degrees in a variety of subjects. A university is an organisation that provides both undergraduate education and postgraduate education...
in Thailand
Thailand
Thailand , officially the Kingdom of Thailand , formerly known as Siam , is a country located at the centre of the Indochina peninsula and Southeast Asia. It is bordered to the north by Burma and Laos, to the east by Laos and Cambodia, to the south by the Gulf of Thailand and Malaysia, and to the...
and is the country's highest ranked university. It now has nineteen faculties and institutes. Regarded as the best and most selective university in Thailand, it consistently attracts top students from around the country. It is named after King Chulalongkorn
Chulalongkorn
Phra Bat Somdet Phra Poramintharamaha Chulalongkorn Phra Chunla Chom Klao Chao Yu Hua , or Rama V was the fifth monarch of Siam under the House of Chakri. He was known to the Siamese of his time as Phra Phuttha Chao Luang . He is considered one of the greatest kings of Siam...
(Rama V), and was established by his son and successor King Vajiravudh
Vajiravudh
Phra Bat Somdet Phra Poramentharamaha Vajiravudh Phra Mongkut Klao Chao Yu Hua , or Phra Bat Somdet Phra Ramathibodi Si Sintharamaha Vajiravudh Phra Mongkut Klao Chao Yu Hua , or Rama VI was the sixth monarch of Siam under the House of Chakri, ruling from 1910 until his death...
(Rama VI) in 1917 by combining the Royal Pages School
Royal Pages School
Royal Pages School is the English name of two different Thai institutions:* The Royal Pages School was the precursor to Chulalongkorn University which existed from 1 April 1902 to 1 January 1911, after which it was reestablished as the Civil Service College of King Chulalongkorn.* The Royal Pages...
and the College of Medicine.

Its campus occupies a vast area in downtown Bangkok
Bangkok
Bangkok is the capital and largest urban area city in Thailand. It is known in Thai as Krung Thep Maha Nakhon or simply Krung Thep , meaning "city of angels." The full name of Bangkok is Krung Thep Mahanakhon Amon Rattanakosin Mahintharayutthaya Mahadilok Phop Noppharat Ratchathani Burirom...
, close to the popular teenagers' hangout, Siam Square
Siam Square
Siam Square is a shopping and entertainment area in the Siam District of Bangkok, Thailand. The area connects to other shopping centres and links to the other shopping districts by sky bridge, such as Siam Center/Siam Discovery Center, MBK Center, Siam Paragon, Ratchaprasong shopping district and...
, and adjacent to the most prestigious and private sports club, The Royal Bangkok Sports Club.

I am a graduation student from Gadjah Mada University, Indonesia (Bachelor Degree on Nursing Program with GPA 3.89 and hold an experienced doing my cl...
More
x