Encyclopedia
Chiavari is a town and comune
Comune
In Italy, the comune is the basic administrative division, and may be properly approximated in casual speech by the English word township or municipality.-Importance and function:...
on the Italian Riviera
Italian Riviera
The Italian Riviera, or Ligurian Riviera is the narrow coastal strip which lies between the Ligurian Sea and the mountain chain formed by the Maritime Alps and the Apennines...
in the Province of Genoa
Province of Genoa
The Province of Genoa is a province in the Liguria region of Italy. Its capital is the city of Genoa.It has an area of 1,838 km², and a total population of about 900,000...
, region of Liguria
Liguria
Liguria is a coastal region of north-western Italy, the third smallest of the Italian regions. Its capital is Genoa. It is a popular region with tourists for its beautiful beaches, picturesque little towns, and good food.-Geography:...
. It is situated near the mouth of the Entella River, in the center of a fertile plain surrounded by mountains except on the southwest, where it comes down to the Mediterranean Sea
Mediterranean Sea
The Mediterranean Sea is a sea connected to the Atlantic Ocean surrounded by the Mediterranean region and almost completely enclosed by land: on the north by Anatolia and Europe, on the south by North Africa, and on the east by the Levant...
. Tourist interest in this town is due to the very clean sea (Blue Flag for clean waters from 1987 until today) and to the expansion of its historical center, that includes typical Genoese
Genoa
Genoa |Ligurian]] Zena ; Latin and, archaically, English Genua) is a city and an important seaport in northern Italy, the capital of the Province of Genoa and of the region of Liguria....
style palaces of great value.

Chiavari is situated near the mouth of the Entella River. It lies in a fertile plain surrounded by hills, with the sea to the southwest. It is a tourist center and regional market for agricultural produce. Chair making, lace and silk manufacture, and slate working are also part of its economy. 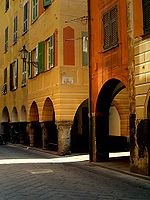 Chiavari grew up on the traces of a Roman camp on the Via Aurelia. A pre-Roman necropolis, which dates from the 8th
8th century BC
The 8th century BC started the first day of 800 BC and ended the last day of 701 BC.-Overview:The 8th century BC was a period of great changes in civilizations. In Egypt, the 23rd and 24th dynasties led to rule from Nubia in the 25th Dynasty...
to 7th century BC, has been uncovered there. The old town contains numerous arcades and buildings from the 13th century, including a castle, several mansions, and the nearby Church of San Salvatore di Lavagna, which was founded in 1224 by Pope Innocent IV
Pope Innocent IV
Pope Innocent IV , born Sinibaldo Fieschi, was pope from June 25, 1243 until his death in 1254.-Early life:...
. The cathedral, was later rebuilt in 1613. Known famously as a center of ancient humanistic tradition, Chiavari has a public library with a collection of manuscripts and incunabula. The beauty of the city is much enhanced by the churches of the Madonna dell'Orto, San Francesco, and San Giovanni. After the discovery of the conspiracy of the Fieschi, in 1542, and the capture of Chiavari by the Counts of Lavagna, the town suffered much, being associated with the conspirators. Among its illustrious citizens were: Luca Cantiano di Moneglia, founder of a school of painting, and Giuseppe Gregorio Solari, translator of many Latin poets. From 1805-1814, Chiavari served as the capital of the short-lived Apennins
Apennins
Apennins was a département of the First French Empire in present Italy. Named after the Apennine Mountains, it was formed in 1805, when the Ligurian Republic was annexed to France. Its capital was Chiavari....
department of the First French Empire
First French Empire
The First French Empire , also known as the Greater French Empire or Napoleonic Empire, was the empire of Napoleon I of France...
.