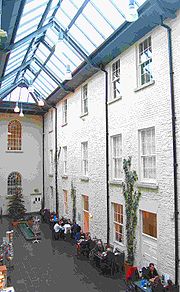 The Chester Beatty Library was established in Dublin, Ireland
Republic of Ireland
Ireland , described as the Republic of Ireland , is a sovereign state in Europe occupying approximately five-sixths of the island of the same name. Its capital is Dublin. Ireland, which had a population of 4.58 million in 2011, is a constitutional republic governed as a parliamentary democracy,...
in 1950, to house the collections of mining magnate, Sir Alfred Chester Beatty
Alfred Chester Beatty
Sir Alfred Chester Beatty Seanad 1985: "Chester Beatty died at the Princess Grace Clinic, Monte Carlo, on 19 January 1968, [...]" . was a mining magnate and millionaire, often called the "King of Copper". U.S.-born, he was naturalised British in 1933, and made an honorary citizen of Ireland in 1957...
. The present library, on the grounds of Dublin Castle
Dublin Castle
Dublin Castle off Dame Street, Dublin, Ireland, was until 1922 the fortified seat of British rule in Ireland, and is now a major Irish government complex. Most of it dates from the 18th century, though a castle has stood on the site since the days of King John, the first Lord of Ireland...
, opened on February 7, 2000, the 125th anniversary of Sir Alfred's birth and was named European Museum of the Year
European Museum of the Year Award
The European Museum of the Year Award , established in 1977, is presented each year by the European Museum Forum , under the Council of Europe...
in 2002.

The Library's collections are displayed in two collections: "Sacred Traditions" and "Artistic Traditions". Both displays exhibit manuscripts, miniature paintings, prints, drawings, rare books and some decorative arts from the Islamic, East Asian and Western Collections. The Library is one of the premier sources for scholarship in both the Old and New Testaments and is home to one of the most significant collections of Islamic and Far Eastern artefacts. The museum also offers numerous temporary exhibitions, many of which include works of art on loan from foreign institutions and collections. The museum contains a number of priceless objects, including one of the surviving volumes of the first illustrated Life of the Prophet and the Gospel of Mani
Gospel of Mani
The Living Gospel was a 3rd century gnostic gospel written by Mani. It was originally written in Syriac and called the Evangelion , from the Greek: Ευαγγελιον and one of the seven original scriptures of Manichaeism...
believed to be the last remaining artefact from Manichaeism
Manichaeism
Manichaeism in Modern Persian Āyin e Māni; ) was one of the major Iranian Gnostic religions, originating in Sassanid Persia.Although most of the original writings of the founding prophet Mani have been lost, numerous translations and fragmentary texts have survived...
.

The Western Collection houses many illuminated manuscripts, rare books and Old Master prints and drawings. The collection of papyri is one of the most extensive in the world and includes almost the entire corpus of Ancient Egyptian Love Songs.

The Islamic Collection is divided between the Arabic, Persian, Turkish
Turkic peoples
The Turkic peoples are peoples residing in northern, central and western Asia, southern Siberia and northwestern China and parts of eastern Europe. They speak languages belonging to the Turkic language family. They share, to varying degrees, certain cultural traits and historical backgrounds...
, Qur'an
Qur'an
The Quran , also transliterated Qur'an, Koran, Alcoran, Qur’ān, Coran, Kuran, and al-Qur’ān, is the central religious text of Islam, which Muslims consider the verbatim word of God . It is regarded widely as the finest piece of literature in the Arabic language...
and Mughal-Era Indian Collections. The Arabic text include treaties on religion, history, jurisprudence, medicine, geography, mathematics, astronomy and linguistics. Some of the finest miniatures from imperial Mughal albums, called Muraqqa', are housed in the Chester Beatty Library; with important paintings from the Late Shah Jahan Album and the Minto Album. The albums were the subject of a recent exhibition and publication by the Islamic curator, Dr. Elaine Wright, Muraqqa': Imperial Albums of the Chester Beatty Library Often on display is the Ibn al-Bawwab Qur'an, copied by one of the greatest medieval Islamic calligraphers.

The East Asian Collection has one of the most extensive collections of carved snuff bottles, many of which were included in the catalogue: The Chester Beatty Library, Dublin: Chinese Snuff Bottles.