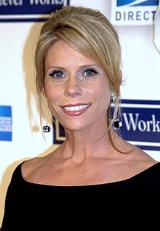 Overview
Cheryl Ruth Hines is an America
United States
The United States of America is a federal constitutional republic comprising fifty states and a federal district...
n actress and director, known for her role as Larry David
Larry David
Lawrence Gene "Larry" David is an American actor, writer, comedian and producer. He is best known as the co-creator , head writer, and executive producer of the television series Seinfeld from 1989 to 1996, and for creating the 1999 HBO series Curb Your Enthusiasm, a partially improvised sitcom in...
's wife Cheryl on HBO
Home Box Office
HBO, short for Home Box Office, is an American premium cable television network, owned by Time Warner. , HBO's programming reaches 28.2 million subscribers in the United States, making it the second largest premium network in America . In addition to its U.S...
's Curb Your Enthusiasm
Curb Your Enthusiasm
Curb Your Enthusiasm is an American comedy television series produced and broadcast by HBO, which premiered on October 15, 2000. As of 2011, it has completed 80 episodes over eight seasons. The series was created by Seinfeld co-creator Larry David, who stars as a fictionalized version of himself...
. She currently appears on the ABC sitcom Suburgatory
Suburgatory
Suburgatory is an American television series created by Emily Kapnek. The series premiered on September 28, 2011, airing on Wednesday nights at 8:30/7:30 Central following The Middle...
. In 2009, she made her directorial debut at the Tribeca Film Festival
Tribeca Film Festival
The Tribeca Film Festival is a film festival founded in 2002 by Jane Rosenthal, Robert De Niro and Craig Hatkoff in a response to the September 11, 2001 attacks on the World Trade Center and the consequent loss of vitality in the TriBeCa neighborhood in Lower Manhattan.The mission of the festival...
with Serious Moonlight
Serious Moonlight (2009 film)
Serious Moonlight is a 2009 black comedy film directed by Cheryl Hines. It stars Meg Ryan, Timothy Hutton, Kristen Bell, and Justin Long. It was released by Magnolia Pictures on 4 December 2009.-Plot:...
.
Hines was born in Miami Beach, Florida
Miami Beach, Florida
Miami Beach is a coastal resort city in Miami-Dade County, Florida, United States, incorporated on March 26, 1915. The municipality is located on a barrier island between the Atlantic Ocean and Biscayne Bay, the latter which separates the Beach from Miami city proper...
, a daughter of James and Rosemary Hines.

Part of the family came from Frostproof, Florida
Frostproof, Florida
Frostproof is a city in Polk County, Florida, United States. The city is located in southern Polk County on the Lake Wales Ridge. The population was 2,975 at the 2000 census. As of 2004, the population recorded by the U.S. Census Bureau is 2,954...
; but she grew up in Tallahassee
Tallahassee, Florida
Tallahassee is the capital of the U.S. state of Florida. It is the county seat and only incorporated municipality in Leon County, and is the 128th largest city in the United States. Tallahassee became the capital of Florida, then the Florida Territory, in 1824. In 2010, the population recorded by...
, where she was a member of the Young Actors Theatre throughout high school.