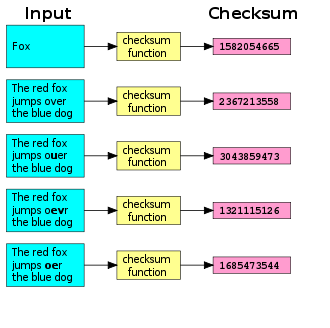 A checksum or hash sum is a fixed-size datum
Datum
A geodetic datum is a reference from which measurements are made. In surveying and geodesy, a datum is a set of reference points on the Earth's surface against which position measurements are made, and an associated model of the shape of the earth to define a geographic coordinate system...
computed from an arbitrary block of digital
Digital
A digital system is a data technology that uses discrete values. By contrast, non-digital systems use a continuous range of values to represent information...
data for the purpose of detecting accidental errors that may have been introduced during its transmission
Telecommunication
Telecommunication is the transmission of information over significant distances to communicate. In earlier times, telecommunications involved the use of visual signals, such as beacons, smoke signals, semaphore telegraphs, signal flags, and optical heliographs, or audio messages via coded...
or storage
Computer storage
Computer data storage, often called storage or memory, refers to computer components and recording media that retain digital data. Data storage is one of the core functions and fundamental components of computers....
. The integrity of the data can be checked at any later time by recomputing the checksum and comparing it with the stored one. If the checksums match, the data were almost certainly not altered (either intentionally or unintentionally).

The procedure
Algorithm
In mathematics and computer science, an algorithm is an effective method expressed as a finite list of well-defined instructions for calculating a function. Algorithms are used for calculation, data processing, and automated reasoning...
that yields the checksum from the data is called a checksum function or checksum algorithm. A good checksum algorithm will yield a different result with high probability when the data is accidentally corrupted; if the checksums match, the data is very likely to be free of accidental errors.

Checksum functions are related to hash function
Hash function
A hash function is any algorithm or subroutine that maps large data sets to smaller data sets, called keys. For example, a single integer can serve as an index to an array...
s, fingerprint
Fingerprint (computing)
In computer science, a fingerprinting algorithm is a procedure that maps an arbitrarily large data item to a much shorter bit string, its fingerprint, that uniquely identifies the original data for all practical purposes just as human fingerprints uniquely identify people for practical purposes...
s, randomization function
Randomization function
In computer science, a randomization function or randomizing function is an algorithm or procedure that implements a randomly chosen function between two specific sets, suitable for use in a randomized algorithm....
s, and cryptographic hash function
Cryptographic hash function
A cryptographic hash function is a deterministic procedure that takes an arbitrary block of data and returns a fixed-size bit string, the hash value, such that an accidental or intentional change to the data will change the hash value...
s. However, each of those concepts has different applications and therefore different design goals. Check digit
Check digit
A check digit is a form of redundancy check used for error detection, the decimal equivalent of a binary checksum. It consists of a single digit computed from the other digits in the message....
s and parity bit
Parity bit
A parity bit is a bit that is added to ensure that the number of bits with the value one in a set of bits is even or odd. Parity bits are used as the simplest form of error detecting code....
s are special cases of checksums, appropriate for small blocks of data (such as Social Security number
Social Security number
In the United States, a Social Security number is a nine-digit number issued to U.S. citizens, permanent residents, and temporary residents under section 205 of the Social Security Act, codified as . The number is issued to an individual by the Social Security Administration, an independent...
s, bank account
Bank account
A Bank account is a financial account recording the financial transactions between the customer and the bank and the resulting financial position of the customer with the bank .-Account types:...
numbers, computer words, single byte
Byte
The byte is a unit of digital information in computing and telecommunications that most commonly consists of eight bits. Historically, a byte was the number of bits used to encode a single character of text in a computer and for this reason it is the basic addressable element in many computer...
s, etc.). Some error-correcting codes are based on special checksums that not only detect common errors but also allow the original data to be recovered in certain cases.

With this checksum, any transmission error that flips a single bit of the message, or an odd number of bits, will be detected as an incorrect checksum. However, an error that affects two bits will not be detected if those bits lie at the same position in two distinct words. If the affected bits are independently chosen at random, the probability of a two-bit error being undetected is 1/n.

A variant of the previous algorithm is to add all the "words" as unsigned binary numbers, discarding any overflow bits, and append the two's complement
Two's complement
The two's complement of a binary number is defined as the value obtained by subtracting the number from a large power of two...
of the total as the checksum. To validate a message, the receiver adds all the words in the same manner, including the checksum; if the result is not a word full of zeros, an error must have occurred. This variant too detects any single-bit error, but the probability that a two-bit error will go undetected is a little less than 1/n.

The simple checksums described above fail to detect some common errors that affect many bits at once, such as changing the order of data words, or inserting or deleting words with all bits set to zero. The checksum algorithms that are most used in practice, such as Fletcher's checksum
Fletcher's checksum
The Fletcher checksum is an algorithm for computing a position-dependent checksum devised by John G. Fletcher at Lawrence Livermore Labs in the late 1970s. A description of the algorithm and an analysis of the performance characteristics of a particular implementation were published in the IEEE...
, Adler-32
Adler-32
Adler-32 is a checksum algorithm which was invented by Mark Adler in 1995, and is a modification of the Fletcher checksum. Compared to a cyclic redundancy check of the same length, it trades reliability for speed. Adler-32 is more reliable than Fletcher-16, and slightly less reliable than Fletcher-32...
, and cyclic redundancy check
Cyclic redundancy check
A cyclic redundancy check is an error-detecting code commonly used in digital networks and storage devices to detect accidental changes to raw data...
s (CRCs), address these weaknesses by considering not only the value of each word but also its position in the sequence. This feature generally increases the cost
Computational Complexity
Computational Complexity may refer to:*Computational complexity theory*Computational Complexity...
of computing the checksum.

A message that is m bits long can be viewed as a corner of the m-dimensional hypercube
Hypercube
In geometry, a hypercube is an n-dimensional analogue of a square and a cube . It is a closed, compact, convex figure whose 1-skeleton consists of groups of opposite parallel line segments aligned in each of the space's dimensions, perpendicular to each other and of the same length.An...
. The effect of a checksum algorithm that yields an n-bit checksum is to map each m-bit message to a corner of a larger hypercube, with dimension m+n. The 2m+n corners of this hypercube represent all possible received messages. The valid received messages (those that have the correct checksum) comprise a smaller set, with only 2m corners.

A single-bit transmission error then corresponds to a displacement from a valid corner (the correct message and checksum) to one of the m adjacent corners. An error that affects k bits moves the message to a corner that is k steps removed from its correct corner. The goal of a good checksum algorithm is to spread the valid corners as far from each other as possible, so as to increase the likelihood that "typical" transmission errors will end up in an invalid corner.