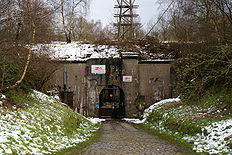 Chaudfontaine is a Walloon municipality
Municipality
A municipality is essentially an urban administrative division having corporate status and usually powers of self-government. It can also be used to mean the governing body of a municipality. A municipality is a general-purpose administrative subdivision, as opposed to a special-purpose district...
located in the Belgian
Belgium
Belgium , officially the Kingdom of Belgium, is a federal state in Western Europe. It is a founding member of the European Union and hosts the EU's headquarters, and those of several other major international organisations such as NATO.Belgium is also a member of, or affiliated to, many...
province of Liège
Liège (province)
Liège is the easternmost province of Belgium and belongs to the Walloon Region. It is an area of French and German ethnicity. It borders on the Netherlands, Germany, Luxembourg, and in Belgium the provinces of Luxembourg, Namur, Walloon Brabant , and those of Flemish Brabant and Limburg . Its...
. On January 1, 2006 Chaudfontaine had a total population of 21,012. The total area is 25.52 km² which gives a population density
Population density
Population density is a measurement of population per unit area or unit volume. It is frequently applied to living organisms, and particularly to humans...
of 823 inhabitants per km².